What's up world, Mike P back from a long break from the Ave.  I felt a little outdone by Curt and Tim on here so I'm back in action bringing you some upcoming heat from Nike SB.

WHAT DID I TELL YOU!? Huh? I said it before and it's coming true! The Nike SB Entourage "Lights Out" Dunk Low is scheduled to release as an April Quickstrike.

The black on black Dunk Low with blacked out cement print on the upper (set with the white midsole and gum outsole, which was a little different from the friends and family release) has gone through more schedules of scrapping and cancellations than any SB Dunk that I can remember.  The hysteria over the Cheech and Chong Dunks isn't even comparable to the Entourage Dunks.  People were paying rape prices when they thought these were scrapped...I may even have considered it for a second, but I waited, and I'm glad.  You can be sure to see me camping out at Uprise or Belmont Army come April.  These have been on my list for some time now, and these sure as hell aren't getting away from me.

Next up is the Jersey Fleece Stefan Janoski Low.

These simple beauties have been on my radar for a while and I can't wait to get my hands on them.  These are actually available as we speak.  Grab em quick! These Janos have an all fleece upper and a nice black contrast piping to match the black alternative laces.  Beautiful shoe.

That's all for now.  Check back in a couple of days as I will be showing some more upcoming Dunks and Janoskis.

Oh what a glorious day!

Mike P here for yet another Nike SB update.

If you know me, my favorite SB Dunk model has, and always will be, the strapped Mid.  The first SB Dunk I ever bought was a Mid with the strap.  The strap on the Mid is what separates it from looking like a dwarfed version of the Dunk Hi and gives it that extra boost of character and uniqueness.

Like many, I was extremely disappointed when Nike SB decided to temporarily do away with the strap on the Mid.  It was said that they scrapped the strap to lower production cost.  Well, as it seems, the Mid sales must have been shit without the strap because this so-called strapless mid didn't make it very long.  Lasting around a year, the Nike SB Dunk Mid has returned to their roots with their first look at the newest "strapped" model.  Take a look:

If you take a closer look at the enlarged version of this shot, you really get to see the detail that is going into this shoe.  As being dubbed on the N-SB forums as the "Blue Lobster" Mid, this is one beautiful pair of kicks.  The buttery-soft suede sits on the toebox, midpanel, and heel, while some kind of detailed leather takes over the swoosh, strap, around the toebox, up the eyelits, and down the back strap.  The midsole comes in at a nice dark blue sitting on top of the light blue outsole (extremely resembling the Blue Lobsters).

I think it is safe to say that the return of the strap on the Nike SB Dunk Mid is going to be welcomed with open arms, especially with this bomb colorway.

No official release date set yet for these, however, they are part of the Fall 2012 line, so expect Belmont Army and Uprise to be getting these in fall!

stfuMikeP on the AVE: New Looks at the "Medusa" Nike SB Dunk Low

Mike P here. Tonight I have some new pictures of what I think to be a beautiful looking dunk dropping SPRING/SUMMER 2012.

What has been dubbed as the "Medusa" Dunk has a real solid pebbled leather encapsulating the entire sneaker (said to represent the stone that people would turn into upon looking at her directly in the eyes) with the green leather swoosh and heel tab (representing the snakes as her hair) and a red NIKE stitching.

All in all, I love this sneaker.  Nike SB has, at times, really been stepping up their game recently with the colorways.  This will be a sneaker to go with any fit - that grey is perfect.

Be sure that Belmont Army and Uprise will get these in the spring...release date info coming later.

What's up everybody? Mike P here. Good to have a new home here on Blvd Ave.

Gettin right into it, what I have for you all today comes straight from Dom DeLuca's twitter feed.  For those who don't know...and you really should, Dom runs Brooklyn Projects out in LA.  If you still don't know, maybe the recently released Nike SB "Reign in Blood" Dunks may give you a hint.  But I digress.

Dom has given us a peek into a few of the new Fall '12 SBs coming our way. While I will try to pay as little attention to the recent news about Nike SB absorbing Nike 6.0 and pushing out newer combined designs, there is a new style amongst these next couple shots.  Keep in mind, I will only be focusing on the Dunks only.

The first look we got was this Dunk (High?):

This all-plum dunk looks like it has some buttery suede on the toebox and sidepanels with some kind of printed leather up the eyelits and around the toebox. And to top it all off, GUMSOLE!

A very simple, yet desirable colorway on this Dunk Low. The pebbled leather swoosh and heel tab are a nice pop to a seemingly all black leather/suede shoe.

Remember the Brian Anderson Camo Highs? These could be a nice homage to the timeless dunks.  It looks like the camo print is done on canvas with suede filling in.

aaaaaaand my favorite of the bunch:

The "Futura II" Dunk Low.  Futura designed his first dunk back in 2003 and it still remains as one of the highest sought after shoes by collectors.  The Futura IIs, as they are already being dubbed, are using a similar colorway but with an amazing-looking quality suede almost everywhere.  The samples dropped on eBay and the NSB Marketplace around 2 weeks ago with a beautiful gumsole.  The released pictures don't seem to have the same outsole, but these will just have to do.

That's my scoop.  Check back with me here on the AVE for more SBs and streetwear. 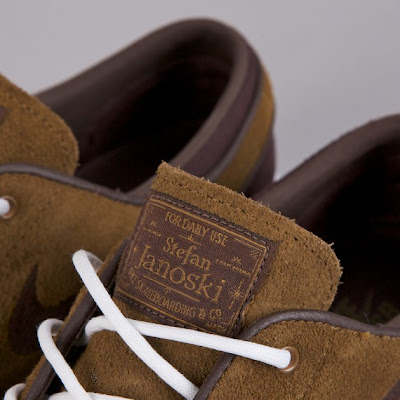 To suggest that the Nike SB Zoom Stefan Janoski does well with two-toned colorways adn a white vulc sole is a gross understatement.  Janoskis come in a range of variants these days, but you can always count on the application of a simple new colorway to demonstrate how much a great silhouette can do with so few colors.  The latest is a tonal brown suede combination of Umber and Boulder whose piping seems especially seamless with embroidered Swooshes streaking across the side panels in the same shade.  They're a great go-to design if you need a versatile shoe on any but the sloppiest of winter days, and you'll find them available now at select Nike SB stores including Flatspot. 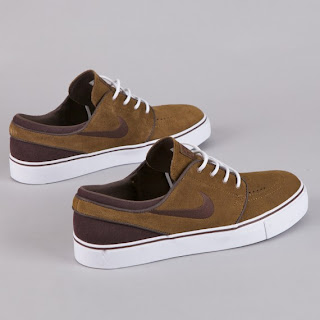 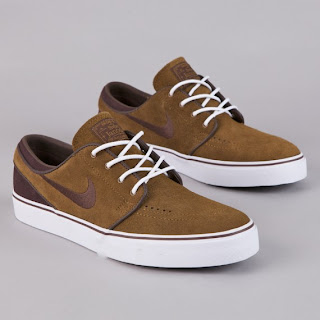 Omar Salazar's unconventional personality was replicated nicely in his first Nike SB signature sneaker, a mix of subtle clean styling and space age technology, so it seems only right that the first significant revision beyond the NFW releases takes the Salazar both forward and backward simultaneously.  From the looks of the Nike SB Omar Salazar 1.5, these Flywire-free joints have been pushed to the casual side with a vulcanized sole, but the notoriously unforgiving classic look belies a LunarLon insole that ensures your comfort on even the biggest gaps.  In a year when Nike SB has looked to its past for inspiration when it comes to colorways, they are flat out killing it in terms of new tech, and you can see more of these Omar Salazar 1.5s set to release next spring when you click the jump below.  via N-SB 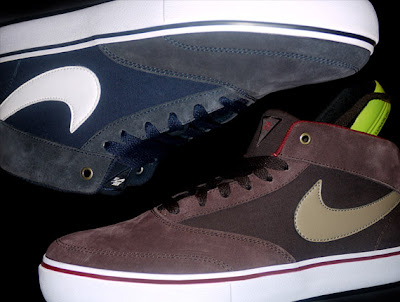