On today's episode of #OutofBounds, Gilbert Arenas, Adam Caparell, and Pierce Simpson discuss a report that some of the NBA’s biggest stars have a “disdain” for Steph Curry, the Warriors superstar who just broke the record for made three-pointers in an NBA Finals game. There are a variety of reasons why his elite peers may dislike the two-time MVP and two-time champion, and the guys lay out what rubs people the wrong way about him. Plus, they debate whether the LeBron James-Steph rivalry is real or a media-driven narrative to hype up the Finals.

With President Trump disinviting the Super Bowl champion Eagles to the White House because less than 10 players were reportedly going to attend their celebration, OOB discusses the matter in "The Pull-Up." Gil explains why the Eagles organization and players should have known better than to engage Trump and offers a winning strategy for making their point.

Staying in Philly, the panel talks about the Sixers hiring a law firm to investigate the "burner" Twitter accounts allegedly used by 76ers president of basketball operations Bryan Colangelo — or his wife? — to share insider information, slander players and execs, and defend Colangelo against criticism. The guys give their thoughts on who's responsible and how the scandal will and should end. Would it be wrong to fire a player or exec for something their relative or friend did?

In other social media news, Thunder big man Steven Adams claims his "fat fingers" accidentally liked an IG comment that clowned his underperforming teammate Carmelo Anthony. The boys give their opinions on Adams' explanation, how Melo will take the jab, and how this is going to affect the relationship between OKC and Melo going forward. Are they headed towards an expensive buyout?

Finally, in "Fair or Foul?" the panel weighs in on the NBA planning to use the Las Vegas Summer League to experiment with a system that will allow coaches to challenge referees’ calls. The guys have many questions about the undetermined particulars, but which is more important: getting calls right or maintaining a smooth game flow? Plus, Gil has a revolutionary solution to the league's refereeing issues.
at June 05, 2018 No comments:


Published on Jun 4, 2018
On today's episode of #OutofBounds, former UFC champion Cody Garbrandt joins Gilbert Arenas, Adam Caparell, and Pierce Simpson to discuss his beloved Cavs losing Game 2 of the NBA Finals to fall into a 2-0 hole heading back to Cleveland. Despite Steph Curry scoring 33 points and making nine threes to set a NBA Finals record, Gil argues that the Warriors superstar is not the front runner to win the series MVP. Plus, Gil and Cody break down the problems with LeBron James' supporting cast.

In "Fire Fit," the panel rates the distinct Finals looks of LeBron and Nick Young. Are King James' suit with shorts ensembles acceptable for basketball royalty? And did Swaggy P wear the wrong Golden State throwback in Oakland on Sunday?

Next, OOB reacts to Cavs players Rodney Hood and J.R. Smith recently saying that it's difficult playing alongside a megastar like LeBron. Gil has some particularly strong words for both guys about their roles on the roster and their place in the lineup and league going forward. With the conversation turning to the necessity of putting in work and preparing to perform, Cody explains what goes into one of his fights.

Following an enlightening oral history of the Hamptons Five meeting, in which Kevin Durant revealed that he needed peer validation in free agency, the crew discusses what separates alpha males from betas in sports. Gil names the real Warriors alpha, as well as several superstars who were not alphas — including some that may surprise you.

In closing, Cody talks about what it's like to kick and be kicked in an MMA fight, so you don't have to find out for yourself.
at June 04, 2018 No comments:

On today's episode of #OutofBounds, Gilbert Arenas, Adam Caparell, and Pierce Simpson discuss LeBron James breaking the record for the most playoff field goals made, as the Cavs beat the Celtics 111-102 in Game 4 to even the Eastern Conference Finals. Gil explains why the loss is a bad sign for the Celtics despite Boston still having the home-court advantage, before asking if rising star Brad Stevens is actually overrated as a coach.

Continuing the LeBron talk, in "Fair or Foul?" the crew weighs in on an effort to raise $1 million on GoFundMe to commission a life-size statue of high-school-aged King James in Akron, Ohio. Is it OK to erect a monument to a player while they're still playing? Will doing so affect whether LeBron decides to stay in Cleveland? Also, the guys give their picks for players who deserve statues, and Gil has some slander for Adam's Knicks.

Looking ahead to tonight's Game 4 of the Western Conference Finals in Oakland, OOB asks if Warriors superstar Steph Curry, who exploded for 35 points in a Game 3 blowout win, is officially back. The team also reacts to Rockets coach Mike D’Antoni's eyebrow-raising comments about the pressure being greater on Golden State and Houston bringing its "A game" in Game 4. Plus, Gil explains what bench players are thinking at the end of lopsided games.

Finally, league documents reportedly show that several NFL teams consider Colin Kaepernick — who remains unsigned — a legitimate starting QB. Debate heats up as the squad asks if these documents increase the likelihood of Kaep winning his collusion case against the NFL, as well as what the case has revealed about NFL teams' priorities.

On yesterday's episode of #OutofBounds, Gilbert Arenas, Adam Caparell, and Pierce Simpson discuss Steph Curry finally catching fire, scoring 35 points as the Warriors humiliated the Rockets 126-85 to take a 2-1 lead in the Western Conference Finals. Gil explains why Chef Curry cooked — scoring 26 in the second half — after underwhelming in Houston. Also, he breaks down what James Harden is doing wrong on offense.

Speaking of Game 3 in Oakland, Nick Young showed up to Oracle with an interesting assemblage of statement pieces, including a pair of Gil II Zero Hibachi shoes that he may or may not have stolen from Gil. In "Fire Fit," OOB rates Swaggy's look and whether his on-court performance lived up to the Hibachi name.

Looking ahead to Game 4 between the Cavs and Celtics, the guys ask if Cleveland will display the same intensity they did when blowing Boston out 116-86 in Game 3. Plus, Gil explains why the C's are good at home but suspect on the road, what Marcus Morris is doing while trying to defend LeBron James, and which player is the surprising key to Cleveland's success.

Next, after Johnny Manziel signed a two-year deal with the Hamilton Tiger-Cats in the Canadian Football League, our panel discusses the move. Is it a good option? The only option? Johnny's goal is to play well in the CFL and get another look from an NFL team, and Gil lays out exactly what he has to do to make that happen.

Finally, it is reportedly “just a matter of time” until Kansas City and Seattle get NBA teams again in expansion. In "Top 5," the OOB crew makes cases for cities that should get franchises, reasoning ranging from strong regional feuds, to strip club scenes. Do you agree that these spots would be great additions to the Association?
at May 22, 2018 No comments:

On today's episode of #OutofBounds, NBA front office veteran and ESPN analyst Amin Elhassan joins Gilbert Arenas and the crew to make sense of Utah's surprise 116-108 win in Houston. Gil and Amin break down the defensive accomplishment of the Jazz — yes, even with James Harden posting 32 points, 7 rebounds, 11 assists — and debate whether Rockets coach Mike D'Antoni is a good playoff coach or not.
Looking forward to tonight's Cavs-Raptors Game 2, the panel predicts whether LeBron and Cleveland can grab another win in Toronto before wondering what's next for troll Drake after his Game 1 altercations with Kendrick Perkins. Speaking of Perk, Amin gives the man his due for one of the NBA's all-time best trash-talking quotes. Also, in the Celtics-Sixers series, can Philly's young stars overcome the moment and Brad Stevens’ masterful coaching of the injury-depleted Celtics?
While Drake is getting all the attention after his tough talk with Perk, he's not the only celebrity NBA fan who gets on people's nerves. In "Top 5," the panel runs down the Top 5 Most Annoying Celebrity NBA Fans, and even throws in a special honorable mention that's sure to piss a bunch of people off.
In a recent ESPN interview, the Lakers’ Lonzo Ball gave himself a letter grade for his rookie season. Taking it a step further than his on-court performance, OOB grades Zo as a player, brand, and rapper, and measures it all against his immense hype. His report card may shock you.
Finally, with the Knicks reportedly trying to finalize the hiring of a new head coach this week after interviewing many diverse candidates — some extremely head-scratching ones among them — Amin explains how New York's process is atypical for the league. He and Gil clarify what the woeful Knicks need to overcome a history of incompetence before everyone makes their picks for whom the team should hire.
at May 03, 2018 No comments:

On today's episode of #OutofBounds, Gilbert Arenas and the crew discuss the Cavs' Game 1 overtime win in Toronto and ask if the disappointing Raptors are already done. In another L for the Six, Drake got into two hilarious altercations with Cavs reserve center Kendrick Perkins, who would undoubtedly end him in a fight. Was Drizzy out of line, and does his heckling hurt the Raptors?
Despite Klay Thompson shooting a miserable 4-for-20, the Warriors beat the Pelicans thanks, in part, to Steph Curry returning from a knee injury and scoring 28 points off the bench. With his stars all back, what does Golden State head coach Steve Kerr need to do moving forward in the series?
Looking ahead to tonight's Game 2 between Houston and Utah, OOB breaks down the only possible way that the Jazz can stop James Harden and the Rockets' potent offense. Actually, there are two methods, but one is illegal.
A recent ESPN article pointed to Kawhi Leonard's new reps — one of whom is his uncle — and the Spurs' control issues as the source of the beef between the franchise and its star. In "The Pull-Up," Gil and the guys ask if the Spurs should still offer Kawhi the $219 million supermax this summer. Also, Gil explains how mixing business and family typically goes wrong.
In "Fair or Foul?" the team weighs in on Jaguars owner Shahid Khan's plan to buy Wembley Stadium and host the Super Bowl in London. Is it a good idea? Also, in discussing the idea of an NFL team in London, Gil explains how a star player's life would change overseas.
at May 02, 2018 No comments: 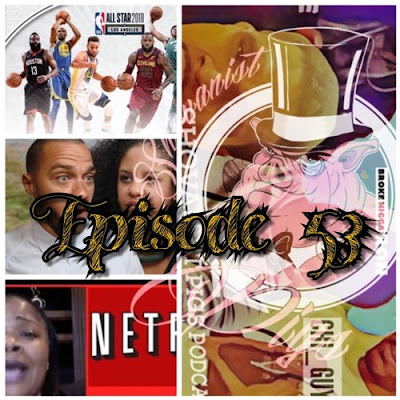 Welcome to episode 53 of the Shovanist Pigs Podcast !! We talked about the NBA all-star draft, MONIQUE vs NETFLIX as well as JESSE WILLIAMS vs his EX, and our usual get down. We appreciate all who have supported us during this time and want y'all to Follow us on twitter, instagram, soundcloud, facebook ..like, share, subscribe on iTunes and Youtube @bigcrownmusic @chiguy705 @brokeniggaron @noemimediagroup on social media and Email us at shovanistpigs@gmail.com for promo/advertisement opportunities or if you would like to be a guest
Also fill out this survey and let us know what you like and don't like about the Podcast... survey.podtrac.com/start-survey.as…t8&ver=standard