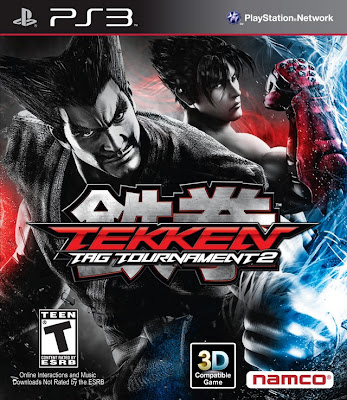 Tekken may host the King of Iron Fist Tournament, but finding victory requires more than a heavy hand. Knowledge of your opponent's arsenal, precise execution, and quick reflexes get you further than simply knowing the strongest attacks. Like its predecessor, Tekken Tag Tournament 2 takes the 3D combat mechanics of the Tekken series and doubles the number of combatants, allowing for more complex and dynamic matches. The combat is supported by a robust selection of modes that makes this fighter a treat for future heirs of the Mishima Zaibatsu.
Despite their differences in rosters, mechanics, and number of dimensions, Tekken Tag Tournament 2 and Ultimate Marvel vs. Capcom 3 share some similarities. Both are fast-paced, brutal games with a rhythm of split-second mind games and long combo strings. The key difference is distance. In Marvel, you may be dodging projectiles at full screen one moment and avoiding a close-range cross-up the next. Tekken is extremely close-quarters, demanding split-second reactions to subtle changes to attack strings. And once an attack gains purchase, it should be maximized for all it's worth. This means busting out an extended combo.
Building an extended combo requires understanding and applying three attack types: launchers, bounds, and tags. Launchers knock your opponent helplessly into the air, but leave you highly vulnerable if they're blocked or dodged. Some fighters can mitigate this risk with one-two combos ending in a launcher. Once the foe is airborne, the attacking player can work in a few midair strikes before following up with the next technique: a bound.
Bound attacks pull your foe out of the air and rebound him off the ground. As the foe bounces back, the attacking player may carry the assault further. Bounds and launchers have their limits and cannot be used repeatedly in the same combo. Learning which moves and combos incorporate these attack types is a key step to learning any fighter in this game. When deciding how to continue the assault, you may choose to incorporate the game's namesake, tagging.
If you hold the tag button immediately after performing a bound, your partner dashes in from offscreen, ready to strike. You can enter the attack manually, or one will be selected automatically if you continue to hold the tag button. In either case, control then switches back to the original attacker, who finishes out the combo. There are other ways to use your tag partner, such as switching between the two or performing a two-person tag throw. But the ability to summon your partner temporarily after a bound helps the pair feel like one cohesive unit working together to achieve victory.
A tag team's symbiotic nature extends to their health as well. Each fighter on a tag team has a health bar. However, if one fighter loses all of his or her health, then that team loses the round, regardless of how much health the other fighter retained. In dire circumstances, you can sacrifice your point character's remaining recoverable health to force the tag character into an offensive dive. This is a great trick for getting out of a bad situation, but it denies your sidelined character the chance to recover any lost health.
If all this talk of bounds and tag combos sounds confusing, you are not alone. Tekken Tag Tournament 2 is a difficult game. It's easy to make mistakes and leave yourself wide open for a counterattack. Then your opponent will bust out some double-digit combo that drags your fighter to the other side of the screen, ending with an ambiguous wake-up game that knocks you right off your feet and starts the whole thing over again. And all of that happens in less than a minute. To play Tekken is to walk one of the most dangerous fighting game tightropes. However, those of you who stick it out will discover a massive ceiling for improvement, thanks to a massive character move list.
at September 22, 2012 No comments: