Games on the AVE: Gamespot Reviews Beyond: Two Souls 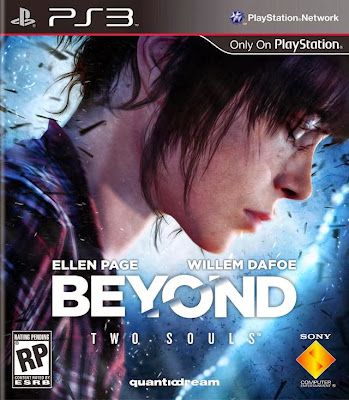 There are spirits all around us. Are they ghosts or demons? Malevolent or nice? What matters is not their nature, but rather how we react to their presence. In Beyond: Two Souls, Jodie's life is colored by an invisible force who never strays from her side, and we follow her down a volatile path in which her identity is constantly in flux. Those around her grapple with the existence of these entities, trying to use them to fulfill their own selfish needs with little regard for the ramifications of their actions. Jodie is the one link between the human race and the mysterious apparitions. And through the struggles that she undergoes, you examine the fragility of human nature and develop a strong bond with the beleaguered protagonists.

At this point, Jodie needs a bandage a lot more than she needs a friendly entity.
Aiden has been a part of Jodie's life as long as she can remember. An invisible entity, he hovers nearby, connected to Jodie although with aspirations all his own. You view the world through the eyes of both characters, switching between them with the push of a button. As Jodie, you move like a human does, inspecting items, walking through rooms, and talking to people. Your actions are restricted, giving you only a modicum of different objects and people to interact with as you're continually ushered down the story's path. Aiden has more freedom in how he traverses the world. Not bound by ordinary rules, he flies unhindered through the air, gliding through walls, flinging objects in anger, and inhabiting the bodies of oblivious people. The overarching plot is filled in by your curiosity. Communication gives you a better understanding of the people in Jodie's life, and Aiden can eavesdrop on conversations outside of Jodie's earshot.
By shifting your control between both characters, you understand each of their perspectives. Jodie is often exhausted by having this ethereal presence connected to her at all times. She's desperate to lead a typical life with healthy relationships, but feels as though Aiden prevents her from doing so. She may mutter to Aiden under her breath, urging him to stay quiet when she wants to be normal, such as when she's cooking dinner for her date. Other times, she asks for help from her companion; she wouldn't be able to corral a horse otherwise. She's kind to Aiden, but clearly resents that she doesn't have complete control over his actions. Aiden is trapped in a plane of existence that is not his own. Unable to communicate freely, he resorts to destructive behavior to get his point across. Maybe he wants to help Jodie and violence is the only path he knows, or maybe he just wants attention. The challenges both characters face are easy to relate to, helping you form a connection to them.

Look what you've done, you made Jodie cry.
Choice plays a role in each of the 20 vignettes that make up the story. You decide whether Jodie responds aggressively, sarcastically, or in some other way to a question, and she can evade the truth or be honest when people ask about Aiden. Major plot points play out no matter which decisions you make, but depending on what kind of character your Jodie becomes, you find yourself in different situations. When invited to a high school party, do you flaunt your powers or shrink from them? Jodie can use Aiden to terrify those around her, but whether you take that route or present a more respectable facade is your choice. Most events take place in a vacuum. No matter how cruelly you react to others, the slate is wiped clean when the next chapter starts. This lack of permanence limits your role in constructing a story unique to you. However, there is enough flexibility in each scene to let you shape what kind of person Jodie is.
at October 08, 2013 No comments: