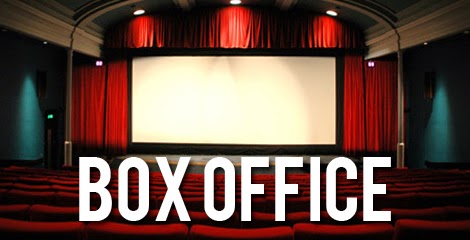 Alright we gonna get right into it,  here's the top 20 films at the box office right now !!! 20th Century Fox's Dawn of the Planet of the Apes remained in first place for a second weekend in a row with $36 million. That was down about 50% from its opening weekend, which isn't great, but it isn't bad compared to some of the summer's other big sequels which fell much harder in their second weekend. So far, the sci-fi thriller directed by Matt Reeves (Cloverfield) has grossed $139 million domestically after just ten days. Overseas, Dawn of the Planet of the Apes added $61 million for an international total of $103 million and worldwide total of $242 million.
Faring the best of the new releases, James DeMonaco's violent sequel to the 2013 surprise hit The Purge: Anarchy (Universal), starring Frank Grillo, Carmen Ejogo, Michael K. Williams and Zach Gilford, opened with $28.3 million in 2,805 theaters, approximately $10 thousand per location. While this was down from the $34.1 million opening of the original movie, the sequel was still made on a fairly modest $9 million budget, putting it already into the black just from its opening weekend. "Anarchy's" B CinemaScore isn't great but it's also better than the first movie and reviews were generally better as well. It's possible that the sequel can achieve the original movie's $64.5 million gross, although it does have a lot of competition in the coming weeks.The second new sequel of the weekend was Planes: Fire & Rescue (Disney), featuring the voices of Dane Cook, Ed Harris, Julie Bowen and more, but it failed to open as well as the original with a third place opening of just $18 million in 3,826 theaters. The original Planes, originally meant as a Blu-ray/DVD-only release, grossed $90.3 million after a $22.2 million opening, although that amount may be tough even with very few family-friendly films opening in the coming weeks.Despite having the biggest star power and reteaming two of the leads with the director of Sony's 2011 hit Bad Teacher

, the R-rated comedy Sex Tape, starring Cameron Diaz and Jason Segel, failed to meet even the lowest projections with a weak opening of $15 million to take fourth place. It did make another $3 million from 9 international markets including Australia, New Zealand and others, but most of that money

came from Australia.Michael Bay and Mark Wahlberg's global blockbuster Transformers: Age of Extinction (Paramount) added another $10 million domestically as it took fifth place for the weekend. With a four-week domestic gross of $227.2 million, the fourth "Transformers" movie is vying for the top movie of the summer domestically over X-Men: Days of Future Past (leveling off with a total gross of $230.5 million) but Disney's Maleficent may have something to say about that (See below). Internationally, the film added another $81.2 million to take its overseas total to $659.1 million. Worldwide, Transformers: Age of Extinction has earned $886.3 million so far.Sixth place went to the Melissa McCarthy comedy vehicle

Tammy (Warner Bros.) with $7.6 million, bringing its total to $71.3 million.Continuing to be one of Sony's biggest hits of the summer, the Channing Tatum-Jonah Hill comedy police comedy 22 Jump Street dropped to seventh place with $4.7 million as it has reached $180.5 million to date.Also dropping three places in its sixth weekend in the Top 10, DreamWorks Animation's animated sequel How to Train Your Dragon 2 took eighth place with $3.8 million and a relatively weak $160.7 million grossed domestically.

Email ThisBlogThis!Share to TwitterShare to FacebookShare to Pinterest
Labels: 22 jump street, box office, dawn of the planet of the apes, deliver us from evil, earth to echo, how to train your dragon 2, results, SEX TAPE, tammy, THE PURGE: ANARCHY, transformers: age of extinction
Older Posts Home
Subscribe to: Posts (Atom)