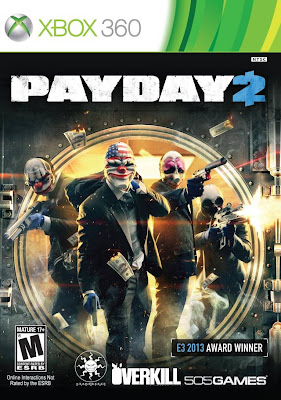 In crime, as in game development, things don't always go as planned. A suspicious passerby might call the cops in early, and then those cops might phase through a wall. The loot you expect to find might not be there, and the end-of-heist reward you're hoping for might never arrive. Civilians might try to flee in the middle of a firefight, or they might disappear through the floor. And yet, despite the potential pitfalls and the actual flaws of Payday 2, things have a way of coming together. The tension of planning and keeping things quiet, the excitement of asserting control when all hell breaks loose, and the satisfaction of a successful score outshine any dull spots, making Payday 2 an immensely enjoyable way to team up for a life of crime.As part of the four-man crew of Hoxton, Chains, Dallas, and Wolf, you are contracted to do jobs by a dude named Bain. He sets you up with various shady characters and presents you with a city map of constantly changing opportunities. There are around 10 distinct jobs that pop up regularly with varying difficulty levels that affect how hard and how lucrative they will be. Some are stand-alone gigs, like bank heists, store robberies, and nightclub burglaries, while others span multiple days and involve stealing art, cooking meth, transporting drugs, dealing with gang members, and stealing from senators.


Mission objectives are generally clear, though there are a number of subtleties to contend with as well. Some challenges can be mastered by experience; it won't take you long to memorize the floor plan of the bank, and you quickly become familiar with the penalty for setting off alarms in the art gallery. Others require you to be flexible; cameras and security guards aren't always in the same place, and even doors, safes, and getaway spots can vary from mission to mission. This mix of constancy and variability does a great job of making you feel more confident with each mission while simultaneously keeping you on your toes. You can never be perfectly prepared for a job, and that's the way it should be.
Unfortunately, there are also some things that are more difficult to prepare for. Strange happenings with civilian and police character models, walls that you can pull solid objects through, and other technical oddities crop up throughout Payday 2. They usually have only minor effects on your criminal activity, but they do add a sour note to the otherwise welcome unpredictability. Such issues aren't likely to derail your heists, but they are occasionally enough to turn your stealthy infiltration into a messy affair.

Oh nothing, just hanging out with some friends and doing a little cooking.
Keeping things quiet is one of the biggest challenges of Payday 2 because so much can go wrong. A suspicious civilian might see you put on your mask. A security camera might spot you at a distance. A guard might round the corner when you're not expecting it. The guy on the radio might not believe you when you pretend to be the guard you just knocked out. Or someone, somewhere might hear the tinkling of broken glass, and before you know it, the cops are on their way and your escape van has bugged out. Completing a job without the cavalry showing up triggers a rush of giddy satisfaction, but more often than not, you're going to have to shoot your way out.
at September 02, 2013 No comments: