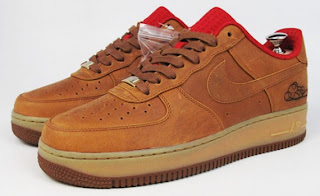 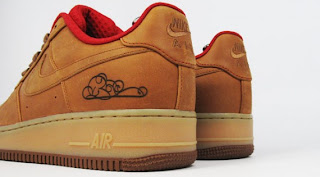 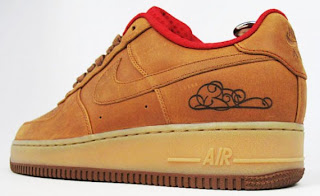 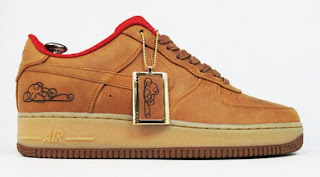 Taylor Steele’s Poor Specimen production company has created over twenty movies, music videos and TV shows, most of which revolve around his love of surfing. He’s not Jack Johnson or anything, but from the looks of Steele’s Nike Air Force 1 Bespoke, we’d have to assume he also has a thing for Gibson guitar(s) (cases). At least, that’s what looking at his 1of1 AF1s would remind most sneakerheads, their oiled brown leather uppers and two toned gum sole bearing a striking resemblance to 2008′s Dunk Low Premium SB ‘Gibson’. That combination is impeccable but Steele went a bit further, applying a custom swirly graphic (inspired by a ripcurl, perhaps?) on the lateral heel, dubrae and hangtag, with a red sockliner and tongue finishing things off with an aggressive punch. Click through to get a better look and be sure to let us know how these rank against the other AF1 Bespokes we’ve profiled here on Sneaker News. via Surfbang
at March 17, 2011 No comments: