What a weekend at the box office !!! Another great weekend for the film industry, as there was alot of movie goers in theaters. OH, Did I mention we have a NEW box office CHAMP ?!?!?!?
Summit Entertainment's The Twilight Saga: Breaking Dawn - Part 1 has earned a massive $283.5 million worldwide since opening internationally on Wednesday. Based on the Stephenie Meyer book, "Breaking Dawn - Part 1" grossed $139.5 million domestically from 4,061 theaters this weekend and added another $144 million overseas for the five days in 54 markets. The $139.5 million domestic opening is the fifth-best ever, trailing just The Twilight Saga: New Moon's $142.8 million, Spider-Man 3's $151.1 million, The Dark Knight's $158.4 million and Harry Potter and the Deathly Hallows - Part 2's $169.2 million. The $283.5 million worldwide opening is the 10th largest ever and a franchise best, passing up "New Moon's" $274.9 million launch. Coming in 2nd place this weekend was the family film "Happy Feet two," making $22 Million. Last weeks Number 1 movie, "Immortals" dropped two spots to Number 3, raking in more than $12 million this past weekend. Adam Sandler's "Jack & Jill" was Number 4, grossing $12 Million in ticket sales, and finally "Puss In Boots" closes out the top 5, making clost to $11 Million this past weekend to make it one of the highest grossing films of the fall/winter time. Check the list for the remaining 12 films, and check back friday for all the other new films in theaters !!! 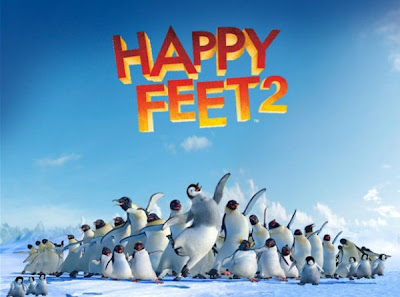 In the follow-up, Mumble, The Master of Tap, has a problem because his tiny son Erik is choreo-phobic. Reluctant to dance, Erik runs away and encounters The Mighty Sven - a penguin who can fly!! Mumble has no hope of competing with this charismatic new role model. But things get worse when the world is shaken by powerful forces. Erik learns of his father's 'guts and grit' as Mumble brings together the penguin nations and all manner of fabulous creatures - from tiny Krill to giant Elephant Seals - to put things right.