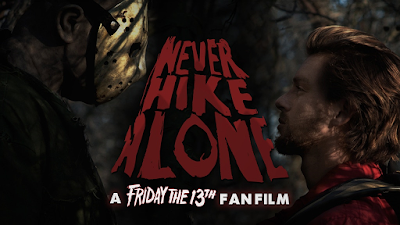 As a lifer Jason Vorhees fan, I have been waiting to get my Friday the 13th fix since the reboot was released in theaters in 2009. Production stalled on its sequel, and it fell into obscurity from there. But with the spring release of the Friday the 13th game, my thirst needed to be quenched again. Enter "Never Hike Alone." I found out about this movie in a F13 group I'm in on facebook, and was interested from the jump. As Halloween approached, I awaited its release on Youtube, and I must say I was pleasantly surprised with the production quality on this fan made film. Sit back, click that link if you're a Friday the 13th Fan and ENJOY !!!

Never Hike Alone: A Friday the 13th Fan Film USA | 2017 | 54 min
A fan tribute to Friday the 13th, Never Hike Alone follows an adventure blogger, Kyle McLeod (Andrew Leighty), who uncovers the long lost remains of Camp Crystal Lake while on a solo backpacking trip. Ignoring the campfire tales from his childhood, Kyle's search turns deadly when he makes the grave mistake of crossing the path of Camp Blood’s legendary mass murderer, Jason Voorhees. Stranded in the forest with Jason on his heels, Kyle must push his survival skills to their limits if he hopes to survive the night. Otherwise, he'll wind up as another lost victim of the cursed camp.

THIS PRODUCTION IS THE EFFORT OF WOMP STOMP FILMS, LLC AND ITS VOLUNTEER ASSOCIATES. NEVER HIKE ALONE IS A PRODUCT OF FAN FICTION AND IN NO WAY AFFILIATED WITH, OR A REPRESENTATIVE OF THE VIACOM/PARAMOUNT FILM COMPANY, WARNER BROTHERS, NEW LINE CINEMA, HORROR INC, THE FRIDAY THE 13TH FILM PROPERTY, OR ITS CHARACTERS.
THIS PROJECT WAS CREATED BY FANS, FOR FANS, TO SHOW APPRECIATION FOR THE FRIDAY THE 13th FRANCHISE. AS OF FRIDAY THE 13th OCTOBER 2017, THIS PROJECT WILL BE MADE FREE AND AVAILABLE TO ALL WHO CARE TO WATCH IT. NO PROFIT SHALL BE MADE OFF ITS VIEWING.
THANK YOU TO ANY AND ALL WHO ASSISTED IN BRINGING THE PROJECT TO LIFE. WOMP STOMP FILMS IS FOREVER GRATEFUL FOR YOUR TIME AND DEDICATION TO THE PROJECT.
at November 09, 2017 No comments: