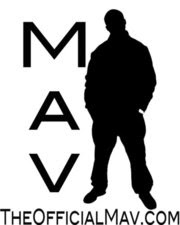 Here we are again yall, with the special edition Artist Spotlight featuring Chicago's Own, the Homie Mav !
We met him on twitter about a year ago, and the homie has been doin his thing here in the Chi with Chicago Rap Legend, Twista. Fastforward to the present, and here we are with a Post in support of Mav's latest solo project "Spirit Killers".
This self-proclaimed "Hybrid-Emcee" got his shot at music stardom when multi-platinum hip hop artist Twista asked him to record a track for his "Twista presents Who'$ Got Next" compilation album. Twista was so impressed with his music and work ethic that he went on to host Mav’s I Got Next 2 mixtape. What separates Mav from the pack is the fact that he is an educated kid that came from a notorious housing project and still remains true to his roots. He continues to represent the HOOD, his real Alma Mater, but at the same time embrace his college experience. In Hip Hop a ‘tough’ persona is deemed necessary, so you won’t see many rappers preaching about a college education. Mav finds ways to deliver a meaningful message in his music like Kanye, but give it in simplistic/hook-driven form like Gucci Mane. You gotta love him. His music can be described as Educated-Hood music, often times a little more hood. Don't expect to hear any deep Pharaohe Monch-Common like lyrics. Most of Hip Hop’s audience today prefer a message in its most simplistic form. I think Jay-Z said it best when he said "if lyrics sold truth be told, I'd prolly be lyrically Talib Kweli." In almost every song Mav tries to include something positive but he also likes making fun-dance music too. “The Idea behind my music is that I embrace the hood but I’m making it cool to go to school for black kids…for any kid. Its where the hood meets college life.”
Support "SPIRIT KILLERS" !!! 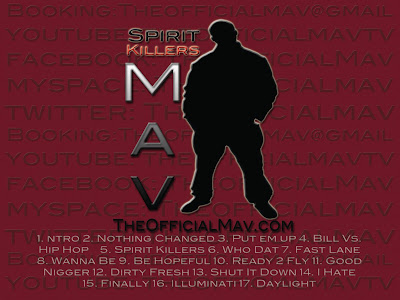 You can check out Mav at any of these links below: