You have to feel a little sorry for Tim Duncan. Labeled as boring throughout his career, The Big Fundamental captured four rings but never the hearts of the basketball-loving public. And there's no secret why; the man lacks style. A 12-foot bank shot may be an effective tactic, but it's not going to convince a casual fan to jump out of his or her seat to bellow a rowdy cheer. It's why a high-flying underachiever like Vince Carter was so highly touted while a multiple champion could elicit a collective shrug. Style is everything in basketball. NBA 2K14 embraces the artistic expression that surfaces only when trading baskets with sweaty men, and in doing so, it's an impressive and exciting representation of the real sport.

You can't blame Bucks fans for not showing up.
Last year's edition of NBA 2K tinkered with right analog stick control, but 2K14 goes full steam ahead with this initiative. Depending on what direction you move the stick in and how long you hold it, you can mimic the movements of a real NBA player. It's a worthwhile improvement that gives you greater control over how you attack defenders, letting you infuse your own personality into the action. Smoothly performing crossovers, jab steps, sweeping hooks, and even flashier moves such as behind-the-back passes with ease lets you orchestrate a show so entertaining even Miami Heat fans would show up on time to watch.
There's an extensive tutorial to guide you through the vagaries of your basketball repertoire, but you're better off ignoring it completely. Oddly enough, the practice floor is the worst place to learn how to play. Fiddling with the stick to pull off specific moves is frustrating, because if you're off by just a few degrees, you do something completely different. Basketball is all about context and reacting to what your opponent is doing, and the stiffness present in the tutorial smothers that freedom. So just head straight to the court. The only way you learn is if you're pushing yourself against the NBA elite.
Defensive players swarm like rabid hawks, relentlessly attacking entry passes and hounding ball carriers. And the only way you're going to consistently score is by being smart with both the ball and your positioning. Lazy passes are turned into fast-break baskets faster than you can flop for a foul call, and the added defensive intensity forces you to play smart or lose miserably. Master your back-to-the-basket game, and you can demand a double team. Pass to your open teammate for a couple of wide-open jumpers, however, and your defenders have to concoct a new plan. There's an enticing chess match going on as you and your opponent size each other up, implement strategies, and then readjust on the fly.

Are you ready for the Evan Turner era in Philadelphia?
The improved controls are paired with diverse animations that make anything that could happen on an NBA court seem possible. Fouls happen because of how you and your opponent are positioned, so you know when you're smartly gambling for a steal and when you're just being stupid. Subtle body movements are important in creating (or eliminating) space between two players, and you usually feel in complete control of how things play out. Blocks are now a formidable weapon for a long-armed big man. Driving point guards can't expect to glide effortlessly to the hoop for free layups. If you're just trying to overpower your opponent, you're going to lose. You need finesse to get open shots, which makes you learn the intricacies of your players' skill sets and plan offensive sets accordingly.
There are still some oddities that detract from the realistic action. The most glaring quirk is that players often don't know how to react when there's a loose ball. They may stare longingly at a deflected pass instead of diving to control it, which would be worth a benching in real life. Plus, the ball doesn't always react like it should. Sometimes it might bounce as if covered in glue, or randomly ricochet like a Ping-Pong ball. These hiccups stand out starkly against the otherwise impressive visuals in 2K14. The franchise has always done a fine job of replicating the faces and movements of players, but now the rhythm of the action so closely mirrors the real thing it's almost eerie.

Someday there will be a mode designed exclusively around Gail Goodrich.
New in 2K14 is a mode called Path to Greatness that lets you follow LeBron James as he tries to elevate his place in the NBA's hierarchy. Two paths--one realistic and one zany--are on offer, and seeing the crazy hypotheticals play out is certainly interesting. Unlike a similar mode in NBA 2K11 that let you fill Michael Jordan's shoes, Path to Greatness doesn't require you to reach a specific stat line to progress. Because you need only win to proceed, you can play your way, which is a lot of fun given LeBron's wide assortment of talents. More fanfic than historical document, this mode is a good way to explore The King's options. And who knows, maybe he will end up back in Cleveland some day…
Despite the occasional technical missteps, NBA 2K14 is a great experience that deftly captures the essence of what makes the NBA so appealing. Nothing could perfectly replicate reality, but 2K14 has almost as much personality, and gives you the freedom to perform how you wish. With lifelike animations, realistic player models, and an assortment of moves that would make even Dwyane Wade blush, NBA 2K14 further blurs the line between the real game and its digital equivalent.
at September 30, 2013 No comments:

Games on the AVE: Some info about WWE 2K14

Games on the AVE: Gamespot Reviews Spec Ops: The Line

Having Michael Jordan in NBA 2K11 was a huge success, so 2K games is keeping that train of thought going with the release of  NBA 2K12 !! Not only will MJ have cover duties again on '12, But both Magic Johnson and Larry Bird will appear on their own separate covers for this years release as well !! With all of the NBA's premier talent signing contracts overseas for this coming season due to the lockout, it might be worth your time on October 4th to go out and cop this !!!!

Check the trailer below: 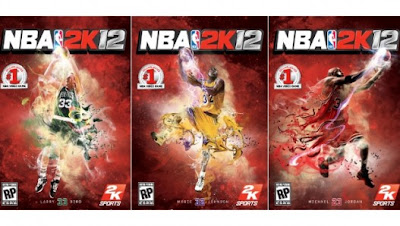 Duke Nukem is back !!! In stores June 14th ladies and gentleman of the United Game Heads of Earth !! Here's the trailer :