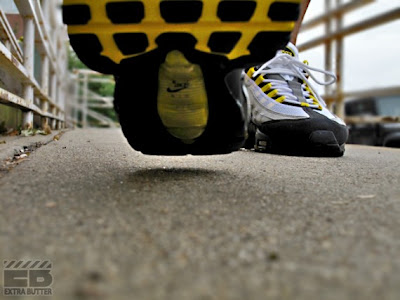 Props to Extra Butter !
Nike named its Tour Yellow shade in honor of the Tour de France general classification leader jersey. It became synonymous with Lance Armstrong's amazing comeback from cancer and subsequent domination of the sport of cycling, over 80 million (!) LIVESTRONG bracelets increasing awareness as they sparked a global fad. Lance's seven consecutive Tour victories remains one of the great achievements in the history of modern sport, so how impressive is it to consistently churn out hit after hit for over sixteen years in a row?! The Nike Air Max 95 in its OG 'grey-dient' look could be a dictionary exemplar for the word 'impeccable', this new Tour Yellow edition a twist on the ever popular bright yellow 'Neon' edition.  The Neons have been retroed a few times over the past several years and sold out each time, so act fast if you want to grab a pair of these Air Max 95s from Nike Sportswear spots or go ahead and get yours right now on eBay 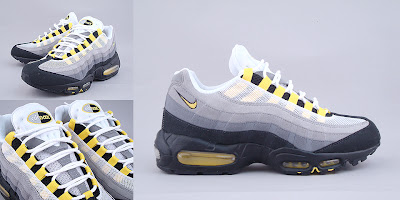