Like it or not, times change. When Max Payne last appeared in a game in 2003, he blasted his way through countless enemies with reckless abandon, aided by his signature ability to slow time and deal graceful death. Today, reflecting modern sensibilities and perhaps his own age, Max takes things slower and makes judicious use of a new cover mechanic. Yet the addition of this contemporary element doesn't mean that Max Payne 3 plays like every other third-person shooter. Far from it. With its gripping narrative, brutal violence, and fantastic implementation of Max Payne's bullet-time ability, this is a distinctive and outstanding game through and through, and it's easily a worthy successor to the Max Payne games that preceded it.

Wherever you go, there you are. It's a truth Max Payne knows better than anyone. Fleeing his New York life to take a job working security for a wealthy family in Sao Paulo, the hard-drinkin', pill-poppin' Max finds that his demons come along for the ride. Though the details of the plot add up to your typical story of conspiracy and corruption, of the rich and powerful preying on the poor and helpless to become even more rich and powerful, the writing, acting, and presentation elevate this tale well above a boilerplate video game crime story.
It's hard to stay ambivalent once you see the horrors being suffered by the innocent here, and you'll likely want to see Max's quest for vengeance through to its conclusion just as badly as he does. Max reveals a complexity here not seen in earlier games, as he hits rock bottom and must either stay there or face his demons head-on and make himself anew. Other characters, too, reveal a surprising humanity. You might be tempted to write off Marcelo, the youngest brother in the wealthy Branco dynasty Max is hired to protect, as the shallow playboy he often appears to be. But in moments of disarming honesty, he reveals to Max a depth that lies beneath the facade he presents to the world.
Cutscenes use multiple moving panels to pay homage to the graphic-novel-style storytelling of previous games without feeling beholden to it, and the considered use of blurring and other visual effects echo Max's state of mind, perhaps making you feel as if you're the one who has been hitting the bottle a little too hard. James McCaffrey does an excellent job reprising his role as Max, bringing a wider range of emotions to a character who has previously often been one-note. The writing is terrific; Max's world-weary wit is as bone-dry as ever, and as he ruminates on things like loyalty and loss, much of what he says has the sound of hard-earned wisdom. Subtle touches throughout the game make Max seem convincingly alive, such as the complex look that crosses over his face at the start of one stage when bloodshed seems inevitable; it's as if he dreads what's coming, but does his best to mentally prepare himself for it.
Max Payne 3 has far more sunlight and color than earlier Max Payne games, but the menaces Max faces here are at least as dark as those he's faced before. The locales Max has to gun his way into or out of are alive with authenticity and detail. Nightclubs throb with dance music and light shows; children play soccer in the favelas; run-down hotels are packed with leftover junk from their earlier days of luxury. And it's not all tropical locations and bad Hawaiian shirts for Max Payne here; a few great flashbacks that take place in Hoboken, New Jersey, reflect the snowy weather and urban atmosphere of earlier Max Payne games, as well as Max's previous fashion sensibilities, and connect his new life with his old one.
Though some things may have changed for Max Payne, one thing that hasn't changed is his ability to blow bad guys away by the hundreds. Three aiming options for the campaign let you customize the gunplay to your liking: hard lock takes much of the challenge out of things, snapping on to the nearest enemy; soft lock sticks to enemies once you've got them in your sights; and free aim leaves it all up to you. Regardless of the option you choose, shooting in Max Payne 3 feels terrific. This is partially due to the game's unflinching violence. Bullets visibly tear through bodies, leaving holes that spurt blood as your enemies die. Each encounter with a group of enemies ends with a bullet cam, showing your final, fatal bullet soaring through the air and striking its target in grisly detail, and giving you the option to pump excessive, unnecessary ordnance into the poor bastard. It's a cathartic and satisfying way to end each firefight.
Bullet time, the defining mechanic of the Max Payne series, lends gunplay a cinematic intensity that remains exhilarating from the start of the substantial campaign until its finish some 12 hours or so later. When bullet time is enabled, you can see every pellet that bursts forth from a shotgun, every bullet that whizzes past your head. Windows break apart beautifully; concrete shatters to reveal the rebar underneath; and all other sorts of believable destruction to the world around you takes place as you and your enemies try to gun each other down.
Bullet time slows your enemies down significantly, letting you aim and fire faster than they can respond. But despite the significant edge this gives you over your foes, they are no pushovers. They make smart use of flanking tactics, so you need to stay aware of what's happening on all sides, and, yes, you need to make effective use of cover. There are still situations aplenty where an old-fashioned head-on approach can get the job done, but by and large, you need to approach combat in Max Payne 3 a bit more defensively than in past games.
Max's vulnerability, and the feeling of danger that accompanies it, makes combat much more nerve-racking than it was in earlier Max Payne games, but it does come with a downside: Max's signature shootdodge has suffered. You can still leap through the air in slow motion like a John Woo action hero, attempting to blow your foes away before you land, but because your enemies also make good use of cover, there's a good chance some of them won't be vulnerable to your airborne assault, and as you get up from the ground after a shootdodge, you're something of a sitting duck. The result is that you may end up using shootdodge from time to time not because it's a particularly effective tactic but because, risks be damned, it just looks so cool.
at May 16, 2012 1 comment: 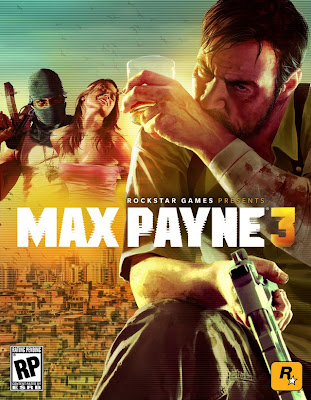