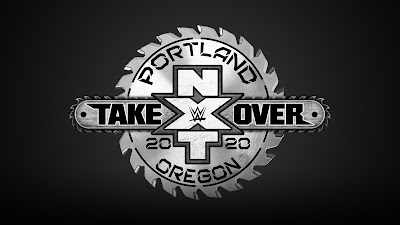 NXT Takeover Portland took place tonight, and Keith Lee defended The NXT North American Championship vs. Dominik Dijakovic to start the event.  After initially evading each others attacks, the 320 pound Lee hit Dijakovic with a running hurricanra shocking his challenger.  Dijakovic was not to be outdone as he landed a cyclone kick sending Lee outside.  The 6 ft. 7 challenger slammed Lee on the ring apron to take control.  Dijakovic landed forearm shots which staggered Lee until the champion countered with a back breaker and a standing German suplex.  The challenger would not stay down though as he hit a top rope death valley driver for a two count.  Dijakovic looked like he was ready to finish off Lee until he was hit with a running shoulder tackle sending him flying into the turnbuckle.

Lee took the fight to Dijakovic outside with a series of thunderous chops to his chest until the momentum was shifted by Dijakovic with another cyclone kick.  As Lee was immobilized outside, Dijakovic hit a springboard senton from the top rope on the champion as he was sitting on a chair.  Dijakovic rolled Lee back into the ring, but he was met with a powerbomb, popped back up to his feet and was met with another powerbomb for a two count.  Dijakovic responded in kind with a top rope Spanish fly for a two count, but his back gave way when he went for a fireman's carry into a knee strike.  Lee countered with a Big Bang Catastrophe for the pinfall victory.

Dakota Kai faced her former friend Tegan Nox in a street fight, and a brawl ensued on the ramp and into the crowd before the bell rang.  Kai attacked Nox from behind as she was making her entrance only to be thrown into the steel barricade and speared through the ringside barricade by Nox.  Kai would not stay down for long as she hit a DDT on the destroyed barricade.  Kai introduced weapons into the match and tried to smash Nox with a cricket bat as she was trapped between the steps, but missed with her swing.  Nox used a trashcan to get back into the fight when she hit Kai with it, then hit an inverted senton on her into the stairs.  Kai turned the momentum around by smashing a trashcan lid into Nox's face to swing the momentum back into her favor.

Nox was determined for revenge after Kai viscously attacked her last year in November and hit a German suplex onto a trashcan for a two count.  Nox's attack continued with a chokeslam from the top rope and a sunset flip into a senton.  Kai turned things around by tossing a chair at Nox and kicking it into her face, and duck taping her wrist to the ring ropes before landing a running kick.  Nox showed that she had a mean streak of her own when she attacked Kai's knee with a laptop, a steel chain and a chair before hitting her with a Shining Wizard.  Nox was about to drive Kai through a table before she was attacked from behind and sent flying off the top rope into the table by Raquel Gonzalez.  Kai crawled on Nox for the one, two, three.

Finn Balor vs. Johnny Gargano was up next and the match started with them trading headlocks and head scissors before Gargano gained the upper hand with a rolling kick to Balor.  Gargano tossed Balor into the corner and it looked like Balor avoided Gargano's attack until he was hit with a spear on the apron.  Gargano went for a shotgun dropkick on the outside until he was hit with a sling blade by Balor.  The longest reigning men's champion in NXT history went after Gargano's leg with a corkscrew leg whip, then attacked his other leg with a knee bar and stomps.  Gargano countered Balor's attack on his legs with an enziguri to his head, and dodged Balor's attack then hit him with a superkick.  Gargano's suicide dive attempt was stopped when Balor caught him mid air, but Gargano fought out and hit him with a rolling senton off the apron.

As the action went back into the ring, Balor and Gargano traded kicks to the head and Gargano collapsed from Balor's kick into a pinfall for a two count.  After suffering brutal chops to the chest earlier in the match and an onslaught on his legs, Gargano took the fight outside and landing a shotgun dropkick on Balor into the barricade.  Gargano wanted to send Balor through a commentators table, but Balor countered with a shotgun dropkick off a table and into the barricade.  Balor rolled Gargano back into the ring for a top rope stomp and a spiked DDT for the pinfall win.

Bianca Belair challenged Rhea Ripley for The NXT Women's Championship.  Belair took control early on with a waist lock slam, but Ripley countered with chops to the chest making Belair retreat.  Ripley charged Belair in the corner, but the challenger moved out of the way and swept Ripley's legs from under her slamming the champion on the mat.  Belair hit a standing moonsault to temporary keep Ripley down before applying a sit down full nelson on her.  Ripley got back into the match with an electric chair slam planting Belair face first and applied a standing reverse leg lock, but Belair would not submit.  The two women traded slaps to the face before Belair used her ponytail as a whip into Ripley's stomach and hit a Gorilla press slam.

Belair sent Ripley outside of the ring and hit her with a senton over the top rope, but Ripley slammed her face first into the stairs after they fought back to their feet.  When the action went back inside the ring, Ripley went to the top rope and it looked like she was going to suplex Belair to the outside.  Belair blocked Ripley's attempt, but she was hit with a Riptide slam after Ripley did a sunset flip to block Belair's attempt at a suplex.  Ripley pinned Belair to retain her championship, but she was attacked by Charlotte Flair after the match who accepted Ripley's challenge for the championship at WrestleMania 36.

Bobby Fish and Kyle O'Reilly defended The NXT Tag Team Championships vs. Pete Dunne and Matt Riddle.  Dunne had control early on after trading forearm shots with O'Reilly then hitting suplexes on the apron to Fish and O'Reilly.  Dunne was backed into the corner by Fish, and the champions took over with O'Reilly hit a jumping knee strike to Dunne.  Fish was tagged in and hit a Samoan drop and the frequent tags continued with O'Reilly landing elbows and knees to the gut and Fish with a senton on Dunne followed by a corkscrew leg whip from O'Reilly.  Dunne was eventually able to tag in Riddle who attacked with forearms, knee strikes spears and suplexes to Fish and O'Reilly.  Riddle was on fire until his knee was chop blocked by Fish to slow him down.

The champions and challengers had to overcome mistakes with them accidentally hitting their partners when their opponents dodged attacks.  In the case of Dunne and Riddle, this led to Dunne getting hit with a kick to the back and a brainbuster from Fish and O'Reilly for a two count.  Dunne and O'Reilly countered ankle locks on each other, but neither would submit.  The title aspirations for Dunne and Riddle looked bleak when O'Reilly had Riddle in a knee bar following a top rope knee dive to Riddle, but Dunne snapped Fish's fingers and broke up the submission.  Dunne and Riddle were able to isolate Fish after taking out O'Reilly, and hit a double kick combination for the one, two three and became tag team champions.

Adam Cole defended The NXT Championship vs. Tommaso Ciampa in tonight's main event.  After a stalemate early on, Ciampa took the fight outside and hit Cole with knees to the face with one sending Cole off a chair by the timekeeper's table.  Cole swung things in his favor with a wheelbarrow suplex on Ciampa sending his head and surgically repair neck into a table.  Cole brought the fight back inside and superkicked Ciampa's knee the hit a backstabber.  Cole's attack on Ciampa's neck continue with a neck breaker, but Ciampa continued to fight.  Ciampa countered Cole's attempt for a sunset flip piledriver into an airway crash slam off the top rope for a two count.  Ciampa took the fight back outside and hit Cole with two powerbombs with the latter sending him through a table.  Ciampa rolled Cole back into the ring for a running slam into Ciampa's knees, but Cole kicked out at two.

Ciampa was met with superkicks when he charged Cole and a Shining Wizard, but Ciampa had the awareness to roll to the ropes to avoid being pinned.  Ciampa and Cole's fight spilled to the outside and Ciampa tried to drive Cole through another table before he was hit with a sunset flip piledriver on the floor.  Cole rolled Ciampa back into the ring only to be met with a draping DDT and a Fairytale Ending slam into the mat, but Cole kicked out again.  Cole's stablemates Fish, O'Reilly and Roderick Strong interfered by attacking Ciampa and rolling him back into the ring, but Ciampa kicked out at two.  Cole delivered three superkicks and a running knee, but Ciampa kicked out again.  Cole sent Ciampa flying into the referee which knocked him out, but Ciampa was able to hit another Fairytale Ending.  The referee was still out cold, and Ciampa's former partner Johnny Gargano attacked him with The NXT Championship belt, then Cole crawled over to get the pinfall on Ciampa.