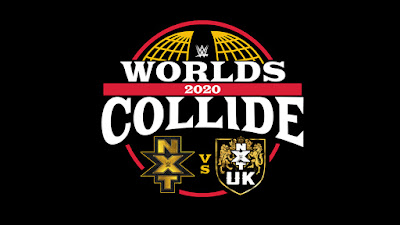 A battle for brand supremacy took place tonight in Houston, Texas when wrestlers from NXT faced off against NXT UK wrestlers.  Finn Balor vs. Ilja Dragunov was the first match tonight.  Balor and Dragunov started by trading headlocks and head scissors before a slap to Balor's face enraged him.  Balor responded with a snapmare takeover and a viscous slap of his own to Dragunov before throwing him outside and landing a running dropkick.  Ilja would not back down from Finn though and landed a chop to his chest once the action went back into the ring sending him retreating outside.

Dragunov tried to keep his momentum going, but he missed a dive from the top rope when Balor dodged the attack.  Balor took control with repeated stomps to his opponent until Dragunov got back into the fight by reversing a suplex into a suplex of his own.  After they traded chops to the chest, Dragunov planted Balor with a deadlift German suplex.  Ilja look like he was going to finish Finn off following a coast to coast dropkick from the top rope, but Finn kicked out at two.  Dragunov went for a senton off the top rope, but Balor got his knees up and hit him with a shotgun dropkick.  Balor followed this up with a top rope stomp and a spiked DDT for the pinfall victory.

Angel Garza defended The NXT Cruiserweight Championship vs. Isaiah Swerve Scott, Travis Banks and Jordan Devlin.  The match started with all four competitors trading strikes with each other until Garza decided to try and be a showman by ripping off his pants and was hit with a triple superkick.  Devlin had Banks hooked under his arm and dodged Scott's attack then slammed him on top of Banks.  Swerve was not to be outdone though as he recovered and landed kicks to his opponents and dropped Devlin with a Death Valley Driver outside of the ring.  Banks imposed his will in the match by suplexing his opponents into the corner on top of each other and hitting a cannon ball on them.

Scott tried to toss a charging Devlin to the outside, but he used Banks bounce off of him and hit Swerve with a tornado DDT.  Garza charged Banks and Devlin and countered a double hip toss by bouncing off the ropes and landing double boots to Scott.  Garza was determined to keep his championship as he dropkicked Banks who was on Swerve's shoulders and Swerve got planted with an inadvertent spiked hurricanrana.  Banks ate a headbutt from Devlin, but responded with a sunset flip piledriver.  Scott hit Banks with a reverse powerbomb for a two count after Garza broke up the count.  Devlin hit Garza and Scott with a double Spanish fly from the top rope.

Garza recovered and looked like he was going to retain after hitting Scott with a Wing Clipper, but Devlin broke up the count, tossed him out of the ring and pinned Scott to win the title.

DIY vs. Mustache Mountain started with Johnny Gargano and Tyler Bate countering wristlocks and armbars and both men went for kicks to the leg, but Bate caught Gargano's leg under his arm.  Bate showed sportsmanship by placing Gargano's leg on the mat and both made tags to their partners.  Tommaso Ciampa and Trent Seven entered the match and had a bit of one-upmanship by striking poses, but the fun and games were over after Ciampa hit Bate with a back elbow.  Gargano followed this up by hitting Seven with a superkick after Ciampa knocked him off the apron.  DIY tossed Mustached Mountain over the commentators tables before celebrating on the apron.

After Bate was isolated with a headlock by Ciampa, Gargano entered the match and hit a slingshot spear on Bate.  Seven got his team back into the match when Bate was able to make a tag and hit Ciampa with a clothesline and nailed Gargano with a DDT.  Gargano responded with a DDT and flatliner to Mustache Mountain as the fight intensified.  Bate and Ciampa traded shots until the former went his risk off the top rope and was smacked with a jumping knee by Ciampa. DIY looked like they were about to finish off their opponents with a running knee/superkick combo, but Mustache Mountain counter with double fists to the face.  Ciampa was hit with a Burning Hammer by Bate and Seven, but he was able to kick out at two.

Bate went for a senton off the top rope, but Ciampa pulled Seven in harms way and Bate landed on his own partner.  DIY and Mustache Mountain traded knee strikes and kicks with Ciampa and Gargano standing tall at the end of the exchange and hitting their running knee/superkick combo on Seven for the one, two, three.  Bate, Ciampa, Gargano and Seven shook hands after in a show of respect.

Toni Storm challenged Rhea Ripley for The NXT Championship in the fourth match tonight.  Storm took control early on with a German suplex into the corner, and Rhea's head bounced of the turnbuckles.  Storm noticed the damage done to Ripley's neck and went on the attack with a butterfly suplex.  Toni continued her focus of attack on Rhea's neck with an STF before the champion made it to the ropes only to be hit with a DDT after the hold was broken.  Ripley fought back by dropping Storm with a kick into the corner and followed up with a reverse cloverleaf leglock.  Storm made it to the ropes and refocused her attack on Ripley's neck with a high angle German suplex for a two count.

Storm looked like she was on her way to becoming the new champion until she missed a frog splash attempt from the top rope.  Ripley took advantage by following up with a Riptide slam for the pinfall victory to retain her championship.  Rhea acknowledged her next challenger in three weeks Bianca Belair who was at ringside during her match against Storm.

Imperium vs. The Undisputed Era capped off tonight's card with a brutal eight man tag team match.  Kyle O'Reilly and Fabian Aichner started the match with Aichner using his strength advantage to toss O'Reilly around and into the corner landing chops.  O'Reilly countered with forearms to the face and kicks before applying a leglock and dragging his opponent into The Era's corner.  Aichner was able to fight out and tag Alexander Wolfe into the match, but his night was short lived following a double kick from Bobby Fish and Roderick Strong.  Wolfe was carried to the back by WWE's medical staff and ruled out of the match.  Marcel Barthel entered the fight, but he was isolated by The UE.

Barthel suffered at The Era's hands with Adam Cole hitting a neckbreaker and O'Reilly and Strong landing kicks in the corner.  O'Reilly made a mistake when he took his eye off of Barthel by taunting Imperium's leader Walter and got hit with a side Russian leg sweep.  Walter got the tag and laid waste to O'Reilly with a thunderous chop to the chest.  The NXT UK Champion also hit a double German suplex on O'Reilly and Strong.  The UE decided their best chance at winning was to eliminate Walter out of the equation when they isolated him and Strong drove him through a table with an Olympic slam.

Barthel was in dire straights when his leg was attacked with a leg whip, a diving knee from O'Reilly and a leg lock, but he fought to the ropes for a break.  Aichner hit O'Reilly with a springboard moonsault as the ref ordered O'Reilly to break the hold.  O'Reilly eventually made a tag to Strong and he and Walter traded chops and strikes until Walter was attacked from behind and hung up on the ropes.  Strong landed forearm after forearm to him until Walter fired back with a clothesline knocking him down.  Cole entered the match and caught Walter with a running knee for a two count.

The fight spilled outside of the ring with Barthel slamming O'Reilly only to be met with a plancha from Strong.  Aichner responded in kind with a springboard frog splash.  Fish and Walter were left and the ring as the legal men for their teams.  Walter hit Fish with a shotgun dropkick into the corner and a powerbomb to secure the pinfall win for Imperium.

Peeeps!!! Welcome to episode 82 of BlvdAve Radio!! On this episode we discuss Joe Biden & Kamala Harris winning the 2020 Presidential el...