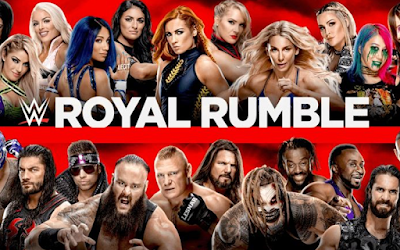 The 2020 WWE Royal Rumble took place last night from Minute Maid Park in Houston, TX.  Roman Reigns and Baron Corbin did battle in a falls count anywhere match to start the night.  Corbin and Reigns fought throughout the stadium with Corbin sending Reigns through a table with a chokeslam and Reigns responding in kind to send Corbin through two tables with Samoan drops.  Reigns got some measure of revenge for Corbin and Dolph Ziggler covering him in dog food when he put Corbin inside of a porta potty and flipped it over.  This fight also saw The Usos and Bobby Roode and Ziggler get involved which ended with Jimmy Uso diving off the structure at the top of a platform.  Reigns ended up spearing Corbin on top of the Astros dugout for the pinfall victory.

The highlights of The Women's Royal Rumble saw NXT wrestlers Bianca Belair and Shayna Baszler set a new record for eliminations in a Women's Royal Rumble match with eight each.  WWE Hall of Famer Beth Phoenix was a surprise entrant and worked a decent amount of the match with a gash on the back of her head that turned her blonde hair red, and.  Phoenix showed why she is known as The Glamazon lasting all of the way until the final three.  Belair and Baszler combined to eliminate 16 of the 30 women, but they both suffered the fate of being eliminated by the 2020 winner Charlotte Flair who won by last eliminating Baszler to go on to WrestleMania.  It will be interesting to see if Charlotte goes after The Raw or SmackDown Women's Championship.

Bayley defended The SmackDown Women's Championship vs. Lacey Evans.  Bayley tried to use mind games against Evans as she did in the past by taunting Evan's daughter who was sitting at ringside.  Bayley's underhanded tactics did not stop there as she faked a leg injury after Evans took control of the match early on.  Evans tried to remain un-phased by this hitting a springboard dive on Bayley to capture her first championship.  Bayley threw Evans into the barricade in front of her daughter and taunted her some more.  Bayley went for a Bayley to Belly suplex, but it was blocked by Evans.  Lacey hit a standing moonsault and went for a top rope moonsault, but Bayley avoided it and used Lacey's tights as leverage to pin her for the victory.

Daniel Bryan challenged The Fiend Bray Wyatt for The Universal Championship in a strap match.  Bryan went after Wyatt early on by backing him into the corner and mounting him with punches, but Wyatt countered with a powerbomb that drove him into the mat.  Wyatt unleashed Hell on Bryan by repeatedly hitting him with the leather strap leaving welts all over Bryan's body.  Bryan found an extra gear out of nowhere when he hit Wyatt with a running knee for a two count.  Bryan took the fight outside diving on top of Wyatt, but that burst of energy was short lived as Wyatt threw him into the stairs.  The fight went back into the ring, and somehow, Bryan was able to kick out of a Sister Abigail from Wyatt.  Bryan was even able to counter a Mandible Claw into a LaBelle Lock, but Wyatt would not tap out.

Bryan hit another running knee and Wyatt kicked out at two.  This only seemed to infuriate Wyatt as he got up and went to another gear as Bryan repeatedly hit him with the strap and Wyatt just stared at him.  Wyatt applied another Mandible Claw and a chokeslam combo for the one, two, three.

Becky Lynch looked to avenge her loss at The 2019 Royal Rumble to Asuka when she defended The Raw Women's championship against her.  These women had no love loss between each other after Lynch knocked her down with a sucker punch and Asuka sprayed green mist into Lynch's eyes leading up to their championship match.  Lynch took the fight to Asuka by dropping her face first from the apron to the outside on the floor.  Asuka was not to be outdone though as she landed a hip attack driving Lynch into the ring post.  The Empress of Tomorrow looked like she knocked Lynch out cold with a kick to the head at one point in the match.  However, Lynch pleaded with the referee not to stop the match.  Lynch landed a Rock Bottom from the top rope, but Asuka would not stay down.  In the end, Asuka's underhanded tactics were her own undoing as Lynch hit her with a spin kick and Asuka sprayed the green mist into her own eyes.  Lynch applied her Disarmher for the tapout to retain her championship.

WWE Champion Brock Lesnar was the first entrant in last night's Men's Royal Rumble match.  The Beast set a Royal Rumble record by eliminating 13 men in the battle royal including Braun Strowman and Keith Lee who outweigh him.  Lesnar's impressive run came to an end due to a kick below the belt by Ricochet who returned the favor from Lesnar doing this to him last week on Raw.  Lesnar was then met with a Claymore kick from Drew McIntyre sending him over the top rope and the crowd erupted.  The biggest shock of the night happened when WWE Hall of Famer and 11 time World Champion Edge made his return as the 21st entrant.  The fans at Minute Maid Park came out of their seats with admiration for Edge who lasted until the final three when he was eliminated by Reigns.  This was Edge's first official match in almost 10 years after undergoing what was believed to be career ending surgery following his retirement in 2011.

McIntyre got hit with a Superman punch from Reigns and it looked like Reigns would join a select few in winning multiple Rumble matches, but he got hit with a Claymore kick.  Drew eliminated Reigns to win the battle royal and now has his choice to go after The Universal or WWE Championship at WrestleMania 36.