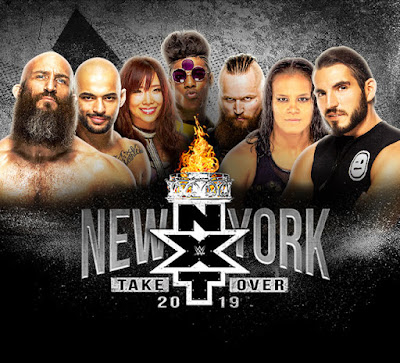 WWE's third touring brand NXT had their annual Takeover WrestleMania weekend event tonight at the Barclays Center in Brooklyn, NY.  The night started with The NXT Tag Team Championships being defended which has almost become a staple to get Takeover events rolling.  NXT Tag Team Champions The War Raiders defended against Aleister Black and Ricochet.  Black and Rowe started off the feeling out process with armbar and wrist lock counters and both planted seeds that they could have delivered a devastating strike to the other, but chose to let their opponent rise to his feet.

Hanson and Ricochet entered the match.  Ricochet is one of the greatest high flyers in wrestling, but Hanson showed agility of his own as the 300 pounder connected on a hand spring back elbow.  Ricochet would go on to hit a cartwheel corkscrew flip over the top rope, and Black and Rowe traded viscous knee strikes as the battled raged on.  Black and Ricochet started in NXT as singles competitors, but their chemistry as a team is off the charts.  However, it was not enough as The War Raiders retained with their Fallout finisher to pin Ricochet.  Black and Ricochet received a thunderous ovation after the match as this appears to have been their swan song in NXT.

The Velveteen Dream defended his NXT North American Championship vs. Matt Riddle in the second contest.  Riddle tossed Dream around like a sack of potatoes at times which included a German suplex on the outside of the ring on to the mat.  Riddle showed a more aggressive side and worked Dream over for most of the match.  Dream was able to hit a series of double ax handles, used an Oklahoma roll up and tried to take advantage of Riddle wrestling bear foot by stomping on his foot, but the former mixed martial artist was having none of it.  Riddle continued his onslaught with an armbar submission, a German suplex from the middle rope and a powerbomb.

Dream persevered and was able to hit his signature DDT and a Death Valley Driver, but when he went to the top rope to hit his Purple Rainmaker elbow, Riddle countered into a chicken wing submission.  Dream was able to counter a submission attempt into a roll up for the win.  Great showing from Riddle and Dream took a beating, but the wrestling prodigy's NXT North American Championship reign will see another day.

Pete Dunne vs. Walter for The NXT UK Championship was up next and the size difference between the two wrestlers made for an intriguing challenge for the longest reigning champion in WWE.  Dunne did his best to avoid the heavy handed chops from his challenger that might only be rivaled by future WWE Hall of Famer The Big Show, but Walter eventually connected to his opponent whom he outweighs by almost 100 pounds.  Dunne was able to counter Walter's beatdown into a heel hook, but the Austrian brute continued to assert his dominance.  Dunne's 684 day reign as NXT UK Champion looked bleak until he was able to use an opening created by twisting and snapping Walter's fingers and eventually hit The Bitter Ending, but Walter kicked out of Dunne's best shot.

Dunne appeared to be knocked silly by Walter's stiff boot to the face after the referee tried to break them apart in the ropes, but he played possum and met Walter on the top rope as he attempted a splash.  Walter countered Dunne's triangle submission attempt with a top rope powerbomb and a splash that crowed him the new NXT UK Champion.

Shayna Baszler surprisingly went to the ring on her own when she defend The NXT Women's Championship in a fatal four way vs. Io Shirai, Bianca Belair and Kairi Sane.  Belair hit some impressive moves during this match including a hand spring into a moonsault and stacked The Sky Pirates to hit a double KOD.  The friendship of Sane and Shirai was eventually tested after they worked as a team for most of the match, but they eventually cost each other the title as Sane stopped Shirai from pinning Baszler after a picture perfect moonsault and Shirai stopped Sane from becoming a two time NXT Women's Champion.  Reality set in that it was every woman for herself.  Baszler continued to show her viscous side with a stomp on Belair's elbow as it was bent on the mat.  Baszler was able to take advantage of the chaos after Belair's double KOD with the Kirifuda Clutch for the tapout on Belair.

Adam Cole vs. Johnny Gargano in a two out of three falls match for the vacant NXT Championship was next in the main event.  Cole and Gargano knew each other like the back of the other's hand countering armdrags and headlocks to start and avoiding a fatal blow.  Cole eventually hit a kick to Gargano's head to take advantage as the latter was going outside to capitalize on Cole.  After a back and forth battle, Cole hit a Shining Wizard knee with his exposed knee for the first fall.  Gargano's short comings at Takeover events looked like it would continue as Cole hit another Shining Wizard shortly after the bell rang, but Gargano was able to kick out.  Gargano gained the upper hand and could have taken a count out for the second fall, but he was busted open in his attempt to bring Cole back into the ring as he was thrown face first into the ring post.

Gargano looked like he was dead to rights, but countered Cole's attack into The Gargano Escape for the tapout.  The action picked up in the deciding fall as Cole and Gargano threw everything they had and more at each other including a dual superkick that saw both wrestlers connect and fall to the mat.  Cole's Undisputed Era stablemates Bobby Fish, Kyle O'Reilly and Roderick Strong would get involved in the match and Gargano ate a high low finisher from Fish and O'Reilly while Strong distracted the referee, but Johnny Wrestling kicked out.  The Barclays Center which sounded like it was 60/40 in support of Cole erupted when Gargano kicked out of a sunset flip piledriver into a superkick and another Shining Wizard by Cole.  Gargano launched a charging Cole into his teammates, threw Strong into the ring post, superkicked Fish and hit a tornado DDT and dropkick on O'Reilly and Strong.

Gargano made his way back into the ring and was able to dodge Cole's Shining Wizard into The Gargano Escape.  Cole looked like he was going to make it to the bottom rope for the break, but Gargano bounced off the rope and held on to the submission to become the first triple crown champion in NXT history.  This was a great start to the WrestleMania weekend as Takeover delivered again.
at April 05, 2019