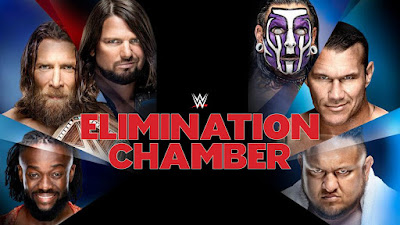 The 2019 WWE Elimination Chamber pay-per-view took place tonight in Houston, Texas, and the event started with a thrilling EC match to crown The WWE Women's Tag Team Champions.  The match which featured Bayley and Sasha Banks vs. Billy Kay and Peyton Royce aka The Iconics vs. Mandy Rose and Sonya Deville vs. Nia Jax and Tamina vs. Carmella and Naomi vs. Liv Morgan and Sarah Logan got the night off to a hot start.  The first of two EC matches displayed some brutality with Logan slamming Sasha's injured shoulder into one of the chamber pods, Nia and Tamina swinging the Iconics into the steel chains that surrounded the pods and Jax going through one of the pods in an attempt to spear Bayley.  Carmella and Naomi were the first team to be eliminated with an innovative pinning combination on the latter by The Iconics.  However, the celebration of this elimination was short lived as Kay and Royce were eliminated simultaneously by Jax and Tamina after a Samoan drop and a splash from the top rope by Tamina.

Jax and Tamina continued to impose their will eliminating Logan and Morgan following a Samoan drop from the middle rope by Jax on Morgan.  The window of opportunity opened up for the remaining teams when Jax's attempted spear on Bayley resulted in her crashing through a pod.  Banks, Bayley, Deville, and Rose created a temporary alliance to eliminated Tamina.  This left Banks and Bayley vs. Deville and Rose.  After a back and forth battle, the match ended with Banks tapping out Deville to The Banks Statement using her good shoulder and wrapping her knee around Deville's throat for the tap out.  Bayley and Sasha had The Match of the Year in WWE when they were a part of the NXT brand in 2015, and four years later, everything came full circle culminating in them becoming The WWE Women's Tag Team Champions.

WWE Intercontinental Champion Bobby Lashley and his hype man Lio Rush vs. Finn Balor for The Intercontinental Championship is the third match of the night.  The seeds were planted during a backstage interview prior to the match that Rush could possibly cost Lashley The IC Championship.  This stemmed from Balor pinning Rush on Raw when Balor was at less than 100% following an attack by Lashley prior to the match.  Lashley dominated Balor, but Rush inexplicably tagged himself in when it looked like Lashley was going to put the finishing touches on the match with a spear.

Balor was able to take control after the tag, and with Lashley taken out after a plancha to the outside, Balor hit Rush with a Coup de Gráce to win his first championship in WWE in two and a half years.  After the match, it appeared as though the team of Lashley and Rush ended when Lashley chokeslammed Rush out of frustration.

WWE Raw Women's Champion Ronda Rousey made quick work of Ruby Riott in their match for The Raw Women's Championship making her look like an enhancement talent.  This was a kind of a shock considering that this could have been done on an episode of Raw instead of pay-per-view. Following the match, there was a stare down between Rousey and her WrestleMania 35 opponent Charlotte Flair.  During this confrontation, the fans in The Toyota Center erupted as Becky Lynch made her way through the crowd and proceeded to attack Flair and Rousey using her crutches before being escorted out by security.  I expect Flair vs. Lynch at next month's Fastlane PPV to happen with Lynch's suspension being uplifted and The Man being added to the Flair vs. Rousey match.

Baron Corbin vs. Braun Strowman in a no disqualification match saw Strowman impose his physical dominance breaking the Kendo stick that Corbin used earlier in the match over his knee.  Strowman slammed Corbin through a table and looked to put him away before Drew McIntyre and Lashley interfered for a three on one assault.  I expected a returning Kevin Owens to make the save for Strowman because he was written out of the storylines by Lashley so he could have knee surgery.  However, The Monster Among Men was left to fend for himself and suffered a triple powerbomb through two tables to give Corbin the win.

The WWE Championship was defended in the main event of a PPV for the first time in a year when Daniel Bryan did battle vs. AJ Styles, Jeff Hardy, Kofi Kingston, Randy Orton and Samoa Joe.  The second EC match of the night started off with the world's toughest vegan DB playing a game of cat and mouse with the Samoan Submission machine Joe.  These two veterans traded chops leaving welts on each other's chests, but battled to a stalemate until the crowd favorite Kofi Kingston entered the match.  After seeing the chamber utilized by Kingston jumping off the top of the structure and AJ using a springboard elbow on Bryan, we saw Joe be the first one eliminated following a Phenomenal forearm from Styles.

Hardy was the next one to see his hopes of capturing The WWE Championship for the first time in 10 years come to an end when Bryan hit a Busaiku knee for the pin.  Orton looked to be in prime position to capture his 14th World Championship after eliminating Styles with an RKO as the latter was attempting another springboard forearm.  Kingston continued his momentum that he picked up from Tuesday when he lasted almost an hour in a gauntlet match and was able to eliminate Orton with a Trouble in Paradise.  The crowd exploded with chants for the 11 year veteran Kingston to win his first World Championship and become a grand slam champion in the process.

After back and forth sequences between Bryan and Kingston, Kingston went for it all with a splash attempt from the top of a chamber pod, but he came up empty.  Bryan was able to hit another Busaiku knee for the win.  After the match, Kingston's stablemates Big E and Xavier Woods came out to help him up and give words of encouragement as the crowd continued to show love and respect which included thank you Kofi chants.  Kofi got the opportunity to be in this match as a replacement for Mustafa Ali due to a concussion, but he made the most of it.  The performance by Kingsotn and the emotion displayed for him tonight could possibly lead to Bryan vs. Kingston at WrestleMania.

The road to WrestleMania 35 has one more stop on pay-per-view before the biggest show of the year, and it will be interesting to see how everything plays out.
at February 17, 2019