Where Are They Now? NBA Edition: Point Guards

No one lasts forever in professional sports. No matter how bright the spotlight - at some point in time - it wall inevitably dim, and ultimately turn off. For many sports stars, the exit from spotlight may be remembered more than the time spent in front. For others, they casually fade from it with grace and class. And some are just forgotten.

Here at BlvdAve, we take a look at some of the NBA's forgotten stars at the point guard position. 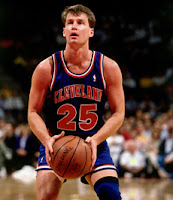 Before Lebron James, there was Mark Price. Drafted with the first pick in the second round of the 1986 Draft, Price was a standout point guard for the Georgia Institute of Technology (Georgia Tech). The All-ACC MVP came into a Cleveland Caveliers franchise that seemed on point guard away from championship contention. Price had a very efficient, consistent career for the Cavs, shooting 40% from 3pt range, over 50% from the field, and 90% free throw (still an NBA record today).

Beyond Price's shooting legacy, he also leaves a dark spot. During the 1991 season, Los Angeles Lakers superstar Ervin "Magic" Johnson announced his decision to retire, due to the contraction of the HIV-virus. Little was known at the time, although the NBA made efforts of NBA implementing AIDS-related precautions after Johnson's announcement. However, upon Johnson's attempt to return to the NBA in 1992, it was Price - along with Utah Jazz forward Karl Malone - who spearheaded an opposition derived at keeping Magic out of the NBA.

Price played for Dream Team II (1994 US National Team, FIBA World Championship), and won the gold medal. Unfortunately for Price, the latter portion of his career was plagued with injuries. His shooting legacy will live on forever.

Price has since assumed coaching roles at his former high school, returning them to a final four state championship game. He then went on to assistant coach at Georgia Tech during the 1999-2000 season. He has been credited for helping develop some of today's NBA talent, most notably Rajon Rondo - whom Price spent time with on shooting during prior to the Boston Celtics 2010 NBA Finals championship run. He's also contributed to the development of Atlanta Hawks forward Josh Smith from the time spent at Whitefield Academy in 2000-01. Price has since worked as a shooting consultant for the Memphis Grizzlies, Hawks, Denver Nuggets, and Golden State Warriors.

He is now an assistant coach for the Orlando Magic. The Magic finished last season tied for 3rd overall in 3pt%. 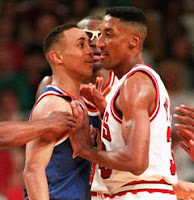 John Starks was perhaps the most popular athlete in New York during the mid-90's than John Starks. In the Big Apple, where personalites were large and the people were tough, Starks "rags-to-riches" and story of triumph through adversity registered on par with a fan base ravid for another glimpse of a championship contender (not much has changed today).  Starks was not only overlooked at the college level, but he was overlooked in the NBA. If hadn't been a mere freak accident that sidelined the 6'5'', 190lb guard from Oklahoma, he may have never had a real NBA career, and therefore never made this post.

Starks' early career was as troubled as his NBA career was successful. After graduating high school, John enrolled into Rogers State College, where he replaced backups on the practice squad. He was ultimately dismissed and transferred to Northern Oklahoma College where he mad the basketball team, but trouble found him again when he was caught with marijuana - and ultimately withdrew from school. He then finished his college career at Oklahoma State University.

John wasn't drafted into the NBA. Instead, he signed as a undrafted free agent with the Golden State Warriors, only to be cut a year later. He then had a stint playing in the old CBA, before trying out for the New York Knicks. During the 1990 season he tried out for the Knicks, and during a practice tried to dunk on All-Star center Patrick Ewing and was thrown down by Ewing, twisting his knee and the Knicks could not release him due to the extent of the injury. Starks always credited Ewing in helping his Knicks career because of the incident.

After recovering from injury Starks went on to help the Knicks contend for nearly a decade in the Eastern Conference. His physicality and athletic talent lead the Knicks to the 1992-93 Eastern Conference Finals, Starks averaged 17pts, 5ast, and made the NBA All-Defensive Team. The Knicks lost to the Bulls, but returned the next season to advance to the NBA Finals. New York lost in seven games to the Houston Rockets, Starks averaged 17.7ppg, and 5.8apg in a losing effort, despite having the worst playoff game of his career (2-18, 0-10 in 4th quarter) in Game 7.

Starks soon fell from the spotlight after that NBA Finals series and Pat Riley leaving for the Miami Heat. He was ultimately usurped by Allan Houston in 1996, working primarily as a mentor he spent the next two seasons as a reserve, starting 11 games in both seasons combined. In 1997, he earned NBA Sixth Man of the Year, then was traded in 1999 to the Warriors, where he begun his NBA career, with Chris Mills and Terry Cummings for Latrelle Sprewell.

John went on to play for the Bulls and Jazz through 2002. During the 2002-03 season Starks failed to make an NBA team and inevitably retired at the age of 36 and the 10,000 point total (10,829pts). His legendary physicality, battles withReggie Miller and from "trucker-to-NBA star" story lives on forever in New York sports history.

After retirement, Starks went on to coach Slamball team Maulers, and currently works for the Knicks as a fan development official. He does work as an on-air personality for Madison Square Garden Knicks home game coverage.

Allen Iverson, aka "AI", "The Answer", was the NBA's most notorious, celebrated, and contemptuous player the NBA has ever seen. A duel sport, All-American athlete in high school (football, basketball) and a  standout at the University of Georgetown, Iverson was drafted No. 1 overall by the Philadelphia 76'ers in the 1996 NBA Draft. Iverson had a stellar rookie season, earning Rookie of the Year honors while averaging 23ppg, 7.5apg, and 2.1spg. 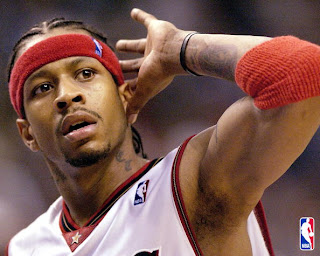 A.I. was revolutionary marketing icon. His cornrows and urban fashion sense translated with the core of the NBA fandom during the late nineties and early 2000's, much to the ire of league commissioner David Stern. More notorious however, was the tumultous relationship between Iverson and then Sixers head coach Larry Brown. The two had a visibly poor relationship that ultimately translated to the underexpected success of the Sixers throughout 1997-2000. The Sixers did -at one time- try to deal Iverson, to no avail. The two would later reconcile their differences and give the relationship a chance.

In the year 2000-01, "The Answer" took the NBA by storm. Iverson would lead the Sixers to an Eastern Conference best 56-26 record, while averaging 31.1ppg, 4.6apg, and 2.5spg. Philadelphia went on to play in the NBA Finals, facing the Lakers and losing in five games. Iverson averaged 35.6ppg throughout the series. His tenacity, small frame, and big heart made him a legend, even in losing.

The following seasons were plagued with injuries and early playoff exits. Iverson was eventually dealt in 2006 to the Denver Nuggets for Andre Millerand Joe Smith. Iverson spent his final seasons with the Nuggets, Pistons, Grizzlies, a brief stint back in Philly before he was unable to make an NBA roster. His post NBA life has been plagued with financial and legal woes. He returned to great reception in Philadelphia, but ultimately left in-season due to his daughters health issues. Iverson has since played for Beşiktaş Milangaz, a team in the  Turkish basketball league. Iverson scored 15pts im 20 minutes but soon returned back to the United States for calf surgery.

Iverson has since been looking to try and break back into the NBA, to no advance. He was recently spotted bringing the game ball out to the Sixers Game 6 victory over the Boston Celtics, in which he was met with audacious love and reception from the pumped up Philly crowd. He said later in an interview that although he is coming to the realization that a NBA career may not be in the cards from him, he is still working to give it another shot. 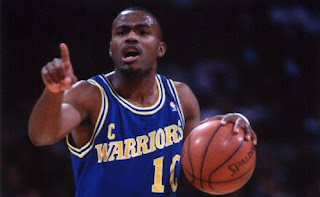 Tim Hardaway revolutionized the point guard position in the NBA during the nineties. His small frame and vicious crossover - dubbed the "UTEP Twostep" - polarized the league, and many defenders. Hardaway was drafted in the first round, 14th overall by the Golden State Warriors from the University of Texas - El Paso (UTEP). After joining the Warriors, Hardaway with the help of Mitch Richmond and Chris Mullin, became dubbed "Run TMC", after famed rap group Run DMC. The trio helped Golden State lead the league in scoring during the 1991-92 season, as Hardaway was second in the group in scoring (23ppg) and lead the team in assists per game (10apg) and 3rd in the NBA.

Hardaway's years in Golden State never brought much postseason success. In five season, the Warriors made the playoffs three times. Exiting early in all three attempts. Hardaway was then traded to the Miami Heat to join center Alonzo Mourning and head coach Pat Riley. The trio saw much success together, in six seasons together the Heat made the playoff every year, making it to the Eastern Conference Finals in the 1996-97 season. Hardaway's Heat lost to the Michael Jordan lead Chicago Bulls in five games. However Hardaway was a candidate for the MVP honors, averaging 20ppg, 8apg, and 1.9spg.

Tim never played many of the Heat playoff games due to a host of recurring injuries. These injuries would follow him for the remainder of his career. He was traded from the Heat to the Dallas Mavericks in 2001, then to the Denver Nuggets in the middle of the season for Nick Van Exel.

Hardaway retired in 2004. However, news and controversy would follow him long after his playing days. While being interviewed by Miami sports radio show, Hardaway expressed some very offensive opinions and comments about homosexuals in the NBA when asked about his comments on distancing himself from gay players,

He would immediately apologize later for his comments, but the sting was still there. The NBA would eventually remove him from its All-Star Weekend ceremonies and he was dismissed from his duties as Trinity Sports, a CBA affiliate's Chief Basketball Operations Advisor.

He has since been a major advocate in the education of gay, lesbian and transgender issues. Hardaway now watches his son, Tim Hardaway Jr. standout for the University of Michigan and a surefire top 10 draft pick. He is also a nominee for the 2012 NBA Hall of Fame. He also runs the Tim Hardaway Foundation
at May 25, 2012