5 Most Underrated NBA Players of 2012

As we near the end of the 2012 NBA Playoffs, we as NBA spectators, writers, mild observers and enthusiasts alike have been witness to some of the best - and worst - basketball of the year. There have been come-from-nothing stories such as Jeremy Lin, and fall from grace stories such as Lamar Odom. Nonetheless, in a condensed season due to the summer's lockout, the NBA hasn't dissappointed.
And as many other season's have gone, some players have flown under the radar. Whether it be the market or the overall perception of an individual, many go without notice despite having good - if not great - seasons. Today we take a look at those players in short order fashion.

Griffin may be a bit of a surprise on this list, due to the coverage of his weekly highlight reel of poster dunks. But Griffins offensive presence on a hot Clippers team goes undoubtedly unrecognized. Dunks attributing, Blake accounts for well over 50% of the Clips' offense and ranks among the league's Top 10 field in major offensive categories.
It seems as if Blake's spectacular dunks and gravity-defying jumping skills clearly overshadow his dominance in the score column. As he and star guard Chris Paul take the 2nd round of the Western Conference Playoffs by storm, his leadership is ever more present.

With what should have been a season devastating injury to Hawks center Al Horford, Josh Smith has put Atlanta figuratively and comparatively on his shoulders to enter the playoffs as the sure 5th seed. Smith for years has been known as a perennial Top 10 shot blocker and "oh, no" 3-pt shot taker and has also been known to fill up a highlight reel or two.

This season however, Smith has taken new form. Evenly spreading his talents to put his team in the best position to win, Smith has actually earned himself a spot among the leagues best in many categories. 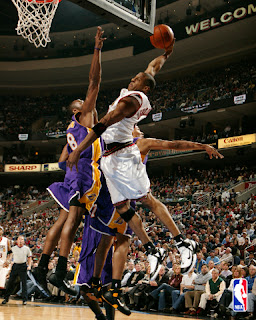 Some contributions can't be seen in the stat column. It is shown on the court, it is shown in leadership. This isn't more true in the case of Philadelphia 76'ersguard Andre Iguodala. Iguodala has dropped in scoring production over the last season, going from 14.1ppg to 12.4. Although, the way he willed his tough Philly team past the No. 1 seed Chicago Bulls in the first round, it is easy to see why some things don't show up on paper.

However, what doesn't necessarily translate in the stat column is his efficiency and shot selection. Andre has improved in shooting percentages in both FG (.445 - .455) and 3-PT (.337 - .394). Above all else is the leadership Iguodala has exuded with a core of younger, very talented players and beside another veteran in Elton Brand. By dropping his scoring and still managing to lead the team in assists (5.4apg), he's enabled the Sixers to fight for the final two playoff spots in the East.
Andre stacks among the NBA's in these categories, 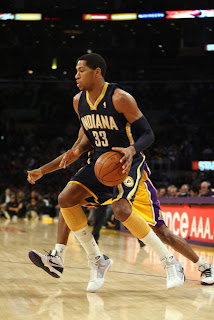 Another testament to the fact that some tangibles cannot be seen in merely the stat column. Danny Granger has long been attributed to being the successor to the Great Pacer Reggie Miller. A hype almost impossible to live up to, Granger's expectations have been set for years imperviously apart from what may have been obtainable.

Granger is another playoff product of intangible leadership qualities. He and a young, tough Pacers team managed embrace the 3rd seed in the East handily beat a Dwight Howard-less Magic team to advance to the 2nd round.

He now faces the greatest of all tests. Taking on the Miami Heat.
Despite such heavy encumbrance, Danny has managed to be the key leader on a Pacer team who has quietly earned respect among the NBA, and who have earned the 3rd seed in the Eastern Conference.
Danny stacks up with the NBA's best in these categories, 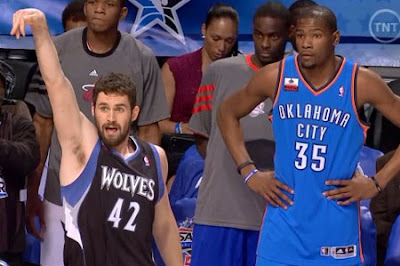 Some players skill and talent does translate to the stat column. And so much so that it can be head scratching when certain players are not recognized for the way they affect the game. None more than T'Wolves franchise player Kevin Love. Love has dominated the game and his position since his rookie season where he nearly averaged a double-double for the season in scoring and rebounding (11.1ppg, 9.1rpg). However, since his rookie season double-double has become synonomous to Love's game.
In 4 seasons, Love has averaged 17.3ppg and 12rpg. Leading the NBA in total rebounding (1112) during the 2010-11 season, and in offensive rebounding (330). Unfortunately in the case of Love, he will be forever shadowed by theLeBron James, Kevin Durant and Dwight Howard's of the NBA. He also has failed to put his Wolves team in position to compete for any significance in the Western Conference, something he must improve upon if he wants to be considered among the NBA's elite. The Wolves' failed to reach the postseason for yet another year. Which makes his argument for undervaluation that much more apparent.

Nonetheless, Kevin's ability, talent-level and importance to the team goes far beyond explanation. He stacks up among the NBA's best in these categories,
at May 14, 2012