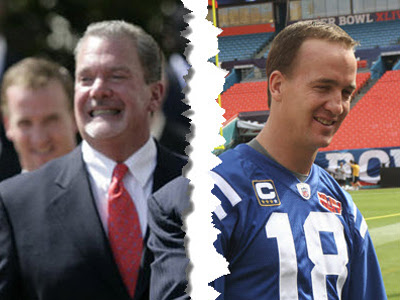 Released by the team.

This is the story of former Indianapolis Colts quarterback Peyton Manning. The Colts announced recently their plans to let their franchise QB go, this comes as a complete changing of the guard in the city of Indianapolis as the future - and era - of Manning and the organization now is just a memory, stadium, and ultimately financial mystery as they both venture into the inevitable. The Colts dodged a $28 million payout to the QB by releasing him before the deadline of Thursday.

Peyton's mark on the Colts organization extends far beyond the field. Manning, who bought a local children's hospital, has long been the sole face of the franchise. In an almost single-handed effort, he transformed a known basketball "Hoosier" state, into a pure out-and-out football community. The Indianapolis Colts were 3-13 when Manning was drafted, in next 12 seasons he lead the Colts to a 138-54 record.

The release of Peyton will undoubtedly be the biggest in NFL history for a quarterback. Johnny Unitas, Joe Montana, and most recently Brett Farve all spent the last few seasons of their respective careers playing for other teams, however no one was released with such reverence and mystery as it currently constructed upon news of Manning's release.

The Colt's will announce Wednesday the release of it's quarterback - and in most people's opinion - the prospect of picking either Andrew Luck, or Robert Griffin III with the No. 1 overall pick of this year's NFL Draft. Ultimately, it seems as if the Colts are taking a risk on the chance one of these two quarterbacks will compete out of the gates, or they are folding the next season to "rebuild" and move in the next direction with whomever they so choose to go with on August 26th, 2012.

Whatever the direction the Colts decide to go with their pick, and whatever decision Manning makes on the next chapter in his career, one thing is certain, it was bound to happen. No one is immortal, and no one can play the game of football forever. If Peyton does decide to come back, and is anything near his old form, whatever team that signs him will instantaneously be a threat in the league offensively.

For 14 celebrated seasons, the Indianapolis Colts and Peyton Manning made for a historic era in the NFL. This is truly an end to one of the best runs to ever take place in professional sports. The Colts are letting go of a true class act and groundbreaking ambassador of the game, who gave his all and only through calamity was unable to serve the organization that showed so much support for him and his family.

Wednesday will be an emotional and momentous, as arguably football's greatest regular season quarterback says goodbye to the only organization he's ever known to either free agency or retirement. This is something of a nature that the sports world has never witnessed before.
at March 07, 2012