Welcome my Avenue to another edition of Your Sports First. This week we have action from all over the globe, from Taiwan to Great Britain, we are bringing all the best in sports.

So without further adieu, let's get into it.

The New York Knicks and their seemingly overnight success point guard Jeremy Lin have become the flavor of the month since Lin's insertion into the starting lineup. The Knicks (16-16) are 8-1 since the Linsanity began, and just took down the defending NBA Champion Dallas Mavericks. The Lin craze has hit full throttle, with every outlet capitilizing on his trending popularity.

From controversy to comedy, everyone is attempting to cash in on Lin. ESPN recently issued an apology for using a racial slur describing Lin. Even Saturday Night Live took light to the sensitivity that race has played in the Linsanity,

Floyd Mayweather, Fox Sports News Jason Whitlock, and Spike Lee have all chimed in on Lin and with the Knicks continued success, it doesn't look like the Lin craze is going anywhere. Even with Carmelo Anthony reportedly entering back into the lineup. Lin has averaged 25ppg, 9ast, and a little under 7 turnovers a game since starting for New York. No matter what the analysts, observers and tweeters say, Lin production is not only historic, but has the Knicks in place as a threat to the top 3 in the East.

Jeremy Lin will have the biggest test of his career when he faces the NBA's reigning MVP Derrick Rose and best team defense in the NBA in the Chicago Bulls on March 12.

But until then enjoy,

British heavyweight boxer Derek Chisora is facing criminal assault charges after a post fight altercation with David Haye. According to AP London, The British Boxing Board of Control said Monday it has opened an investigation into Chisora's conduct before, during and after Saturday's title bout in Munich. Video shows Haye, antagonizing Chisora after his loss to boxer  Vitali Klitchko. Chisora slapped Klitchko during a weigh-in earlier before their fight, and spat water in the face of his brother Wladimir.


During the post fight press conference Haye challenged Chisora to schedule a fight against him. When things began to get heated between the two. Names were exchanged and a immediate challenge was issued. Chisora got up and proceeded to confront Haye. Once they got near each other, blows were exchanged, glasses were thrown and a tripod was picked up by Derek and what appeared to be him attacking Haye with it.


The Boxing Board is also looking to speak with Haye about the incident as the figure out what charges will be appropriate in the matter.


"Following the extensive media coverage that my World Boxing Council heavyweight title challenge against Vitali Klitschko in Munich at the weekend has attracted, I feel I must wholeheartedly apologise for my part in the regrettable scenes both before and after what was to be the biggest night of my career."
"Whilst my behaviour was inexcusable, there were many things that went on behind the scenes that ultimately caused my frustrations to boil over, however this is, of course, no excuse. I cannot go into the specific details at the moment as quite rightly the British Boxing Board of Control will be investigating this matter and also the altercation that took place between David Haye and myself where I was struck by a bottle.
"Despite all of this, the bottom line is, I have let my family, my team and worst of all, the sport I love down. I acknowledge that my actions were totally unprofessional, with or without provocation. Now, with a cool head and the benefit of hindsight, my actions at the weekend were regrettable to say the least and I am deeply embarrassed at the scenes reported in the media.
"I acknowledge that I have a duty as a professional boxer to conduct myself properly at all times, especially with boxing being a sport of controlled aggression. I have let lots of people down on Saturday night, including myself, and for that I am truly sorry.
"In Munich I fully cooperated with the German authorities and as a result I was released without charge.
"I will be making no further comment at this stage and will wait for any formal hearing to take place." 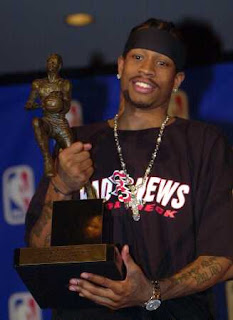 Former NBA MVP and 11-time All-Star Allen Iverson's financial has been well documented over the past months. Extremely in debt and needing work, Iverson has entertained ideas of playing in Puerto Rico and now has an offer from an indoor soccer team to play for a little over $20,000 a game and with $5,000 bonus for every goal scored. This is an undoubted heavy fall from grace for an athlete who has earned over $150mil in total salary and even more in endorsement deals.

Unfortunately, now for the mercurial star it is slim pickings as far as opportunities are concerned. Iverson  now has an opportunity to step back into the proverbial spotlight by playing as a mascot of sorts and marketing tool for a minor league indoor soccer club.

Hopefully whatever decision Allen makes, he can get out of his financial debt and get his life back together. I have rooted for the underdog point guard his entire career, and now is no different.

The Oklahoma City Thunder duo of Russel Westbrook and Kevin Durant made history in their 124-118 overtime defeat of the Denver Nuggets. The pair combined to score a total of 91 of the Thunder's 124 points. That was good for 3rd all time in combo's to score 90+ points in a game. Much can be said about Oklahoma's chances to take the West, but with a performance of this multitude clearly sets OKC apart from the rest of the Western Conference.


Kobe Bryant wants a decision about Pau Gasol one way or the other. The 5-time NBA Champion wants management to make up it's mind about whether or not to trade the Los Angeles Lakers forward. The Lakers fell the Phoenix Suns 102-90 in a frustrating loss. That sparked Bryant's demand to Lakers brass in a agitated post-game rant,


"Basketball is such an emotional game, you got to be able to have all of yourself in the game and invested in the game. We didn't have that," Bryant said after Gasol had 17 points and 12 rebounds against the Suns. "Pau, it's hard for Pau because of all this trade talk and all this other stuff, it's hard for him to kind of invest himself completely or immerse himself completely into games when he's hearing trade talk every other day. I wish management would come out and either trade him or not trade him."

Kobe then went on to add that he's spoke with Pau about the confusion,

Other News and Notes