Back at it again on the avenue. Another crazy week in sports, both NFL and NBA are in full effect. This weekend brought you crazy finishes, down right disrespectful blowouts, and flat out jaw dropping knockouts.

This week on BlvdAve, we bring you the top plays and stories of the week that was.....


Your Week In Sports


The NFC and AFC Divisional playoffs series were meant to be watched. If you look at my predictions for last week, you will clearly understand why. The way it works is like this, take everything you know about football, shine it up real nice, turn it sideways, and.... well you know the rest.


Let's take a look at this last week's NFL games and take a peek at the games that will determine who plays at Lucas Oil Stadium for Super Bowl XLVI:


The Saints turned it over five times, end of story. No it was much more intriguing than that. The San Francisco 49'ers have played lights out defense for 17 weeks now, still holding opponents to no rushing touchdowns. The Saints ran for only 34 yards on 14 attempts, abandoning for Drew Brees to do what he does best, gun the ball. And that's what Brees did, passing for 462 yards, 4 touchdowns and 2 interceptions, something happened, but it wasn't Brees playing bad.

Alex Smith happened, and in a major way. The former No.1 overall draft pick has been long forgotten, lost in the wave of over 5 offensive coordinators, multiple head coaches, and no stability whatsoever in the front office. Alex Smith ignited a 49'ers offense that hadn't seen as much offense as they produced against the Saints ( 299yds passing, 3TD's ) since Week 11 against the Cardinals. Smith was automatic, hitting a struggling Michael Crabtree ( 25yds, 1TD, 3 drops ) and Vernon Davis ( 7 receptions, 180yds, 2TD's) to catapult the 49'ers to a sizzling last minute victory.

Shout out to oatmealninja123 for putting this together:


To say the Denver Broncos were treated would be an understatement. The New England Patriots put the Denver Broncos in a place where many thought they should have been at to begin with. Tom Brady looked like he set the clock back 10 years, the New England defense looked like they actually played football this season. The Patriots held the Broncos to season-best lows, by in some categories, more than 50yds off the season average ( 252yds passing (season avg 294), 103yds rushing (season avg 117 ).

Tim Tebow-time stood still in this match-up, as he was sacked 5 times, fumbled twice, and was overall frustrated by Bill Belicheck's chess like approach to game-planning against the unorthodox Broncos offense. Rob Gronkowski got 3 opportunities to try and pop burst the football on the ground, reaching pay-dirt against the Broncos 3 times for over 145yds. This was an all out drubbing of Tim Tebow and the Denver Broncos, but at the end of the day, hats go off to Denver for pulling an improbable season and making this season one to remember.

And to send off Teb's properly:


This was undoubtedly the most uninspiring game of the match-ups over the weekend, in my opinion. The Balitmore Ravens struggled offensively - and like expected - defensively held the Texans to 13pts. Ray Lewis had his Baltimore team fired up defensively, scoring 4 turnovers against the Texans, limiting Arian Foster (but not stopping) to 132yds and a touchdown.

Joe Flacco and the Baltimore offensive played mistake free football. Relying on the defense and managing a clock efficient game. Flacco did not throw an interception, the Ravens skill players didn't turn the ball over one time, and the Baltimore Ravens owned the time of possession against the Texans 31:20 to 28:40.

Bottom line, this was a good ol' fashioned football game.


If the games were played on paper, the Green Bay Packers would have already won the Super Bowl. Good thing you actually have to play the game. It is widely agreed that the bye-week tends to help teams who need a rest after a hard fought regular season. Although statistically many winners of their respective divisions in the regular season rarely win the Super Bowl, typically they make the Super Bowl. However, Super Bowl repeats are the most uncommon of the scenarios.

This makes the outcome of the Giants and Pack so titillating.

The Green Bay Packers came out to Lambeu Field as the underdog, having the week off and merely cruising into the playoffs, many had forgotten the dominance that carried this team to a near perfect 15-1 record. Maybe even they forgot. The Giants looked to regain their '07 form, bringing a ferocious four-man rush, making the soon-to-be crowned leagues MVP Aaron Rogers appear to be rattled and out of his comfort zone (outside the pocket).

Eli Manning and the Giants offense looked to continue their dominance, with a little help from a divine intervention. Manning out-threw Rogers 330yds to 264yds, slicing the suspect Packers offense for 3 touchdowns and one interception. However, it was a hail mary pass to Hakeem Nicks that sealed the Packers fate and gave the Giants a ticket to the dance, before the dance by the bay against the San Francisco 49'ers.

So as far as the paper champ Packers, you can take your regular season stats, shine it up real good, turn it sideways and....... 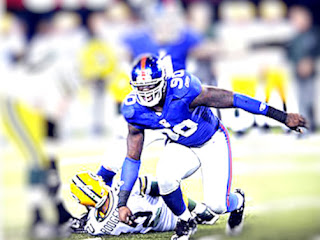 This game will reinforce the creed that 'defense wins championships'. The San Francisco 49'ers come into this match-up as not only the playoffs best defense, but the NFL's as well. Holding every team that lined up against them to one or fewer touchdowns rushing. On the offensive side, not only is the 2006 No.1 overall pick quarterback Alex Smith didn't just lead one San Francisco game-winning drive in the final three minutes against New Orleans, he led two. A 28yd run for score and the enigmatic, clutch pass to Vernon Davis with 9secs left on the clock.

The Giants are hitting their stride at the right time as well. Not even being expected to make the playoffs, they have help teams to 2 touchdowns or less in each of their last four games coming into this contest. Eli Manning and the Giants offense are firing on all cylinders as well. Although the rushing game was a league's worst coming into the playoffs, but in the last two games they have rushed for a total of 267yds, the highest two game total of the entire season. The two-headed beast of Brandon Jacobs and Ahmad Bradshaw were instrumental in the Giants Super Bowl win in 2007.

Prediction: New York come into the Bay with much swag and confidence. However San Fran has been playing this brand of football all season against the NFL's best. 49'ers defense proves too tough and Alex Smith and the Niners' offense keeps rolling.


Baltimore Ravens @ New England Patriots
The New England Patriots obliterated the Denver Broncos defense, which stacked with the league's best throughout the season and in the defeat of the Pittsburgh Steelers. They dominated Denver in every phase of football in the AFC Divisional contest. Tom Brady threw a playoff record tying six touchdown passes, the Pats defense held the Tebow offense to 252 total yards of gain. The Patriots are playing playoff football at the right time.

On the contrary, the Baltimore Ravens are an opponent unlike many in the NFL. The most physical, smash-mouth team in the NFL, led by Ray Lewis and Ed Reed, two former Super Bowl champions who look to finish their distinguished careers on top with another. It's hard to tell what you will see in the offense, Ray Rice (21 attempts against Houston, season avg 17.1 attempts) needs to get the Ravens ground game going if quarterback Joe Flacco (176yds passing, 2TD's, 0INT) to effectively use the passing game against a suspect Patriots defense that seems to finding it's form at the perfect moment. 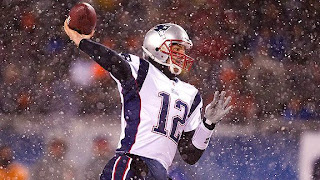 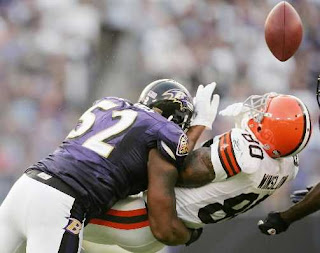 Prediction: The Baltimore Ravens have all the right pieces to beat the red-hot Patriots. However, every playoff game gives Tom Brady a chance to set himself apart on a historical perspective.With a win against the Ravens his playoff record would move to 15-4, the most by one player on a single team in NFL history. He is currently tied with first ballot Hall-of-Famer's Joe Montana (14-5 49'ers), Terry Bradshaw (14-5 Steelers), and John Elway (14-8 Broncos).


Look for something spectacular from Tom Brady, but a hard fought game has seasoned New England head coach Bill Bellicheck out-witting Ravens coach Jim Harbaugh, putting the Patriots back in the Super Bowl to continue their dominance of this generations NFL.


Either way this is going to shape up to be another great weekend in the NFL. Check out Your Sports First next week to see how these predictions stacked up with the weekends games!
at January 20, 2012