What's up my Ave, back again for a quick look at what happened this week in sports. In the wake of the NBA season things have slowed down quite a bit as far as buzz in the NBA and NFL but the stories are still pumping.

So let's take a look at some of the more notable stories in sports this week.

BlvdAve & Your Sports 1st: This Week in Sports: NFL

They just didn't expect it to end quite like this.

Recent news that Owens suffered a torn anterior cruciate ligament more than likely will serve as the proverbial death knell. ESPN reported that Owens won’t be able to return until at least November. The agent for T.O. Drew Rosenhaus reported Tuesday that the receiver had surgery to repair a torn ACL this offseason, but said his client will be ready for the 2011 season and is not considering retirement.

"He's many, many months into his recovery now. He's doing fantastic," Rosenhaus told reporters. Rosenhaus stated Dr. James Andrews, who performed the surgery on Owens, was confident the 37-year-old receiver had a chance to play as soon as August.


"He is a legendary healer. He comes back from injury faster than anybody I've ever seen," Rosenhaus said.

Whatever the matter, looks like T.O. was lucky enough to get a head-start on his next endeavor after football.

Hopefully for Owens it's not sooner than later.

The NFL owners and NFL Players Association met again on Monday in Minneapolis, Minnesota with hopes of potentially striking a deal. And if you don't know before you read this blog...... There still is no deal.

According to reports, the only two that showed up to the meeting were NFL commisioner Roger Goodell and NFL Players Association executive director DeMaurice Smith. The two sat and had a one-on-one without any owners or players in the room.

For the past couple of weeks the talks have been deemed "complex" and "complicated" by owner Roger Goodell, however both sides are aware that a deal needs to come together in the near future, in order to preserve team training camps and the preseason. Bear Down.

One topic at the top of the list is the rookie wage scale. Owners have been adimant about reducing the value of the a 1st rounder's rookie contract. However, some players are still saying that the rookies entering the league need to get these big money contracts.

Last year's No. 1 overall draft pick Sam Bradford received about $50 million guaranteed in his rookie deal, and the owners have long looked to drastically mark down those type of price tags.

Another issue on the table is revenue sharing, which boils down to owner's and player's not being able to split a 9.3 billion dollar pot.

The key topic unquestionably is how to split revenues in the future. The NFL is a $9.3 billion industry, with projections such revenues will increase substantially soon when broadcast contracts come up for renewal. For the 2010 season, the NFL set TV ratings records.

If you had a choice between T.O. being healthy and the NFL coming to terms, which one would you pick?!

BlvdAve Note: Good news for Chicago Bears fans, Bears TE Greg Olsen told the "Waddle & Silvy" show on Monday that Jay Cutler looked great during throw arounds and that we should not expect his injury from the NFC Championship game to affect him at all this season.

"I am not a doctor [but] yeah, he looks fine," Olsen said Monday on "The Waddle & Silvy Show" on ESPN 1000. "He looks completely normal to all of us. I think he feels fine so I don't think there is any lingering effects from anything." 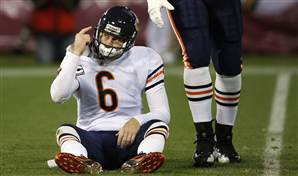 He also expects the Bear's offense to play a huge role this season.


"For awhile here we've been the stepchild," Olsen said. "The offense has always played second fiddle, deservingly so because we've had some of the top defenses and top defensive players in league history. But we feel like we have a good core nucleus of young offensive players and Jay being right up there as the guy. With Matt [Forte] and our receivers, Earl [Bennett], Johnny [Knox] and Devin [Hester], I think we've got a lot of guys who are ready to have a little bit of consistency."

Read more "As I See It" @ chicagonow.com/asiseeit