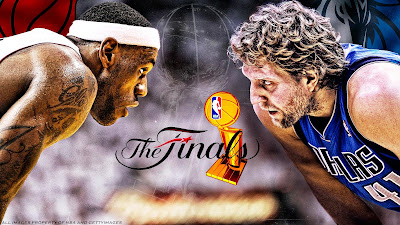 As the sun settles in The Lone Star State, the Dallas Mavericks will look to stop the bleeding that the Miami Heat have inflicted. Drawing the first blow against the momentum shifting Mavericks, the Miami Heat suffocated the highly potent Dallas offense down the stretch and took their role players out of the game completely.

Dwayne Wade says night in and night out that the Miami Heat lay their hat on defense. And after the 88-86 shutdown on Dirk & Co. I can believe that they just might. Equipped with 3 of the leagues top 20 scorers and 2 of the leagues top 3 scorers, the Miami Heat have a unique advantage against most teams by relying so heavily on lockdown defense and using their offensive dominance when it matters.

So the plate is definitely full for the Dallas Mavericks. Looking at a 2-1 series tonight at the American Airlines Center for the Mavs and the window for a ring is starting to get alot smaller.

So let's take a look at tonight's key to watch:

Dirk Nowitzki has to have help-

Here are some of the lines from the bench in Game 3 for the Mav's and Heat:


The most unflattering vision of this series thus far, is the fact that it looks exactly like the Chicago Bulls vs Miami Heat. Dirk Nowitzki has been the only consistent offense and it has been difficult even for him to penetrate or get open looks. Although Dirk's shot is so close to perfect that it rarely matters if he is defended or not, he is finding extra added pressure from defenders who close out during his turnaround fadeaway. Ultimately making it hard for him to get comfortable and in a rhythm.
The fact that the other 11 players of the Dallas Mavericks have yet to significantly step up in these NBA Finals, enough so that an otherwise serene Dirk Nowitzki went in on Mav's fire-starter and usually consistent spark off the bench guard Jason Terry.
"They keep sticking him [James] on Jet in the fourth quarters and he's been doing a good job," Nowitzki said. "Jet hasn't really been a crunch-time, clutch player for us the way we need him to."
In the Mavericks past two losses against the Heat in these Finals, Terry has been 0-for-7. Although Heat head coach Erik Spoelstra has elected to stick LeBron James on Terry much like he did Derrick Rose in the Eastern Conference Finals, Dirk still sees room for opportunity.
And he's also not shying away from going in on Terry to motivate better play.
"We all know Jet. He's a confident young man," Nowitzki said before Tuesday's shootaround. "He knows we need him to close games out in the fourth.

"I'm not really worried about it. I didn't call him out. I was just stating a fact. He knows he had zero points in [the fourth quarters of] Game 1 and Game 3. He knows that's not going to cut it."


And Terry feels likewise.
Terry's response to Nowitzki's clutch comment: "Truth, truth, it's all truth."
It's going to be interesting to see what Dallas does to make sure they don't go into their last game at the AAC Thursday with their backs literally and figuratively against the wall. It will also be just as intriguing to see how Miami responds with an opportunity to truly seize the moment with a team reeling from a devastating defensive style loss. Jason Terry just may have added insult to injury as well by making these statements after being called out by Dirk Nowitzki.


"They know to take me out of the fourth quarter, which they didn't do in Game 2," Terry said of the Heat's choice to turn to James defensively, "then they got a good chance."

Added Terry: "Let's see if [James] can defend me like that for seven games."

Last thing Miami needed in this series was bulletin board material, and especially not LeBron James, who responded after all the hype behind the comments.

"You got to let sleeping dogs lie sometimes. But, maybe he's trying to get himself going and maybe that's what he looks for. You never know guys' motivation and their tactics and everything behind stuff. We know that Jason Terry is a great player and he's going to really try to impose his will tonight and we really have to be ready for that."


And as for James potentially wearing down from guarding Terry for seven games.

"He’s not going to wear down and he’s going to look forward to the challenge."

So tune in tonight at 8pm ET on ABC, or whatever local affiliate you have that broadcasts the game, because this is going to be probably one of the hardest fought games of the series.


See more "Chicago, As I See It"  @ chicagonow.com/asiseeit