Not quite the basketball aficionado, but it still remains true. Ain't nothing over, til it's over. And the Miami Heat got a lesson in that Thursday night at home at the American Airline Center against the Dallas Mavericks in Game 2 of the NBA Finals, losing 93-95, going back to Dallas for 3 games in the best of seven series.

The game was endearingly close throughout the first half, both teams playing tough defense and setting up half-court offenses. Until the Heat went on a 13-0 run after being up by 2, leading Dallas by as much as 15 points when this happened...

And then for some strange reason a 15-point shift becomes a ballgame. Many of the Dallas Mavericks bench and starters saw Wade and James as taunting them, and what should have been the final blow to any momentum shift became the prime catalyst in one of the most epic comebacks in NBA history.


After that Wade 3, the Mav's put the screws on Miami's scorching hot offense. After coming out of the ensuing timeout with 7:14 left to play in the 4th, the Mav's held the Heat scoreless until the 3 minute mark, and went on a 22-5 run that ultimately closed the gap, took the lead, and won the game.

And you already know who set it off down the stretch, in the clutch.

Dirk Nowitzki scored the final nine points for Dallas in the final 2:44, hitting an 18-footer, then driving to the lane for two for the tie, then took the lead nailing a 25ft three point jumper ( Dirk also made sure to hold up the three fingers a little longer).

Helf merely scoreless throughout the first three quarters, Miami made it hard for Dirk in the past two games, holding him to just 6-18 until the final two minutes of the 4th.

The Big Three on the other hand, not so well down the stretch. Wade went scoreless after that epic three pointer to put the Heat up 15. Ironically enough, Wade still finished as the Heats leading scorer with 36 points. James spotted Miami 2 points from the line, but went 0-4 shooting from the field.

The Heat collapsed, and the Mavericks capitalized.

Here are some things to look at in tonights game:


The King vs The Matrix

Shawn Marion was a mere afterthought going into the series for Miami, understanding his explosiveness and knack for attacking the basket. But Marion showed that his 33yr old legs haven't lost a step, scoring 20 points, and basically being the constant that kept Dallas in the game when it looked otherwise out of hand..

"He's been phenomenal just taking the challenge on both ends," Nowitzki said. "He can get up, he's athletic on the perimeter, he's long, he can contest shots. He's a good rebounder. But also on offense, he's been phenomenal. He's been cutting for us, he's been posting up. He's been getting offensive rebounds, put-backs. So he looks really comfortable right now. He's got a bounce in his step and it's fun to watch."

And that is exactly what LeBron James is going to have to contain. Many wondered why Bosh guarded Dirk in the final seconds with no switch. While Dirk did take Bosh the cup, it's assumed by conventional wisdom that Dirk was more likely to pull up for a jumper of find a slasher to the basket. That slasher would have been Marion who set a screen for Dirk then rolled. And who was guarding him in those final seconds and refused to switch on Dirk?

The Mav's run primarily zone defense so 1-on-1 matchups are not very realistic. So whoever has the task of guarding LeBron or Wade, just hold on for the ride and try not to fall off.

After exorcising their old demons during a brilliant postseason, the Heat saw them return in Game 2. When "The Decision" happened and the Heat had their "welcome party," the stakes for Miami's 2010-11 season were made clear: championship or bust.

There's only one way for the Heat to wash this black mark off of their new-look franchise, and it's the same way the Mavericks washed away their collapse against the Blazers in Round 1 -- win the series.

After the collapse in Game 2 Miami must immediately put that game out of their minds and consider the series tied up 0-0 and not 1-1.

If the Heat do, the Game 2 disaster will become a footnote in history, the last stumbling block the Heat encountered before getting the first of what could be many rings.

But if they fail to win in Dallas or can't close out the series when it goes back to Miami, the Game 2 collapse and the shortcomings that fueled it will haunt the team and the franchise until they do win their first championship ring of the LeBron era. 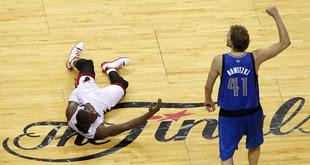