Your Sports 1st on BlvdAve: Stairway to Seven

In case you missed Dirk's greatness.....

A flower cannot grow on it's own. It takes a village to raise a child. There is no "I" in team. These quips not only define the strategies for simplicity in life, where help simplifies everything. It is the blueprint for success. In team sports, like no other, the teams that play together are the most successful. Even the seemingly omnipotent Michael Jordan had a supporting cast of Horace Grant, Scottie Pippen, and Steve Kerr who silently holds what 3-pt shooting record scraps Reggie Miller left over.

So why is it that it seems like it's Derrick Rose vs the Miami Heat?

Despite a 20-10 effort from Carlos Boozer, a very solid game from Luol Deng ( 20pts, 8rebs, 3stls, 2blks) the Chicago Bulls were dominated down the stretch physically and Derrick Rose couldn't find the lane like a drunk driver.

Rose hasn't fully trusted his teammates as they have trusted him all season, and with reason. Mainly because alot of the reason he even earned his MVP above his current nemesis LeBron James, was that he carried an otherwise shoddy offensive front to compete with the NBA's best. Ultimately rewarding the Bulls with the best record in the NBA.

With this new assignment comes adjustments. Alot of which required Rose to negate the open looks in order to establish aggressiveness and keep the defense on it's heels. But when the gaps get smaller and ultimately close, the learning curve opens wide up.

With LeBron James guarding Rose late in the 4th quarter, and seeming to do a damn good job at it. What does Rose do if there isn't a corner to turn? Kick it out to a defended wing? Simply put his head down and run into whatever brick wall may lay ahead and hope for the best? Or step back for a jumper that is probably doubtful coming off the finger tips?

Rose chose the latter with seconds remaining in the 4th quarter with the score tied 85-85. He stuttered, James stayed grounded. He jabbed, and James didn't budge. 6...5...4.. Rose stepped back for a 18ft jumper that missed left. Korver came up with the rebound but Chalmers picked his pocket to send it into overtime.


It was another opportunity at MVP time. Which Derrick is quickly finding out is earned still after the regular season is over. Despite his struggles, the Bulls still believe he's the guy to go to late.

"That's his shot. If he sees an opening where he can drive, then we want him to drive. But if he wants the pull-up, he's made that shot all year for us. If it goes in, we're all praising him. If it doesn't go in, everyone wants to criticize him.

But that's the life of a reigning MVP. Pressure is two fold more than ever before. But more to the point is that this is life of the NBA playoffs. Something a spurned LeBron James has had to learn the hard way throughout his career, after being dubbed "The Chosen One," and "King James," LeBron suffered having to carry not only the scoring load, but most of all the work while being the only star player on a competitive Cleveland Cavalier team.

“I can definitely relate,” James said of Rose recent struggles. “Having a coach of the year and being MVP and then having to go out against teams that have multiple guys that can break you down."

James makes the case for "The Decision" seem easy when you take into account what is happening with the Bulls lack of scoring contributions. A team that relies so heavily on team defense that it often forgets how to play team offense.

Anyone miss Ben Gordon yet?


The Stairway To Seven Begins Tonight.....

Tonight is a must win, not just because the Bulls will ultimately be eliminated if they lose Game 5 falling 4-1 to the Miami Heat. Tying the Heat 4-4 in the years series, a morbid result of being 4-0 then choosing to lose the 4 in the playoffs. The Bulls must win because they let an opportunity slip in both games 2 and 4, and the Bulls still have a chance to seize home-court advantage merely by winning Game 5 tonight.

And there's the MVP, beat down gang style for two straight games in South Beach, Rose gets a chance to come back home to heal his wounds. He's fine regardless. Frustrated, but fine. Who wouldn't be frustrated in this situation, going back home down 3-1 with the chance of Miami celebrating a berth to the NBA Finals on their home court. But he's not going to admit to showing fatigue from a grueling season carrying the Chicago Bulls, at times, on his uber-tattooed shoulders.

He hasn't lost his fast twitch explosiveness or his rock solid confidence either. Just listen to him.

"Trust me, no excuses" 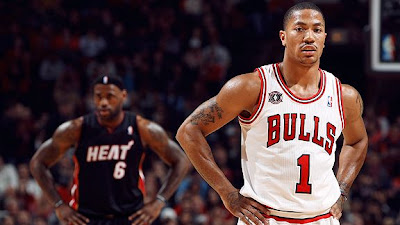 Forget South Beach, meet D. Rose and the Bulls on the West Side of Chicago.....