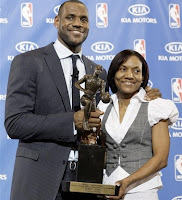 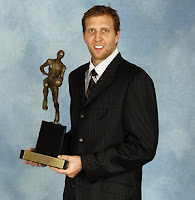 
The basketball god's have spoken. They have demanded that Dirk Nowitzki come to the front as an NBA legend, and avenge his 06' loss to the Miami Heat in which Dwayne Wade and Shaquille O'Neal dominated and broke the will of the young Nowitzki and Co., coming from down 0-2 to a 4 game winning streak and claiming the Larry O'Brien.


The have also called to LeBron James, Dwayne Wade, Chris Bosh, and Pat Riley. Riley envisioned a trio playing around Dwayne Wade two years ago when the pair played in the Olympic Summer games. Realizing what it takes to win in the NBA, having multiple threats and constant pressure, Riley moved space and relied on Wade to resign on order to pull off perhaps on of the greatest acquisitions in modern sports history. This recent summer Co-GM of the Year winner Pat Riley managed to pull LeBron James away from Cleveland for less money, signed Chris Bosh for less money all while it was understood that Wade would ultimately sign for max money. Genuis.

The NBA brass also got a good consolation prize. Albeit the ultimate Finals perhaps would have been Los Angeles Lakers attempting to close out a 3-peat against the bitter rival Boston Celtics or even the newly built Miami-tron. But this creates even better storyline, with revenge, greed, loyalty, and desire all mix together for one of the world's most competitive showcases of professional talent. LeBron James, Dirk Nowitzki, Dwayne Wade, Chris Bosh, Jason Terry, Jason Kidd, Mark Cuban, and you can even throw in "The Matrix" Shawn Marion and you got your self a star studded NBA Finals.

So the time has come. 1st to four will undoubtedly live in NBA immortality. Judgment time is near, and 12 players must be ready to ball out. But before tip let me break it down for you:

LeBron vs MJ vs Dallas
No other player in NBA history has been chasing more ghosts than LeBron James, self-titled "Chosen One" aka "The King" aka "King James", LeBron immediately pinned himself in comparisons with Michael Jordan. He even had the audacity to don the sacred 23 coming out of high school. Bold. But LBJ was indeed a man-child, living up to the hype of talent James not only earned the Rookie of the Year award but has continued dominance in the NBA earning recent back-to-back MVP nods before being dethroned by Derrick Rose this past season.

In the recent weeks, Lebron has shown that he his amongst the best in the NBA, maybe even positioning himself at the legends table. Even Scottie Pippen, second fiddle on the Bulls dynasty teams from 1991-1999, spoke a bit outside of himself and claimed James just may be better than his "airness" when it comes to all around play.

Dirk's Revenge...
Dirk Nowitzki may have more to prove than LeBron James. Wringing to get back into the Finals, he not only gets an opportunity to prove that his legend extends beyond the regular season, he gets to do against the man and the team who stole that opportunity away 5 years ago.

Like anyone else in the NBA world, Dirk watched as LeBron James and Chris Bosh fled to Miami to join Dwayne Wade and form a potential superpower.  Forgetting that Dirk was actually allowed to speak with teams during last summer's free agent frenzy, none of the NBA's 29 other teams bothered to pick up the phone, figuring the impossibility maybe to pry Dirk away from owner Mark Cuban and the only city he's ever known in his American life.

That is no one outside of the 214 area code.

Cuban offered Dirk an $80 million contract for four years back in July and even then the two didn't think the possibility of a South Beach reunion in June was possible.

"I didn't think that it was gonna be in the first year right away that we'd be back in the Finals," Nowitzki said, recalling the night he told his emotional boss he'd be staying for four more years.


"So it happens to be Miami again, and we'll take it."